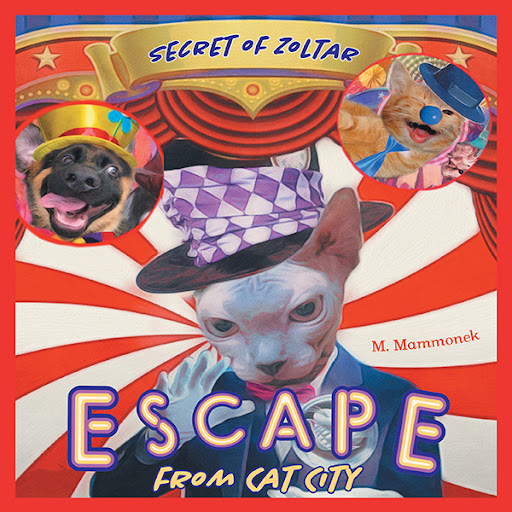 Escape from Cat City 2
Secret of Zoltar
by M. Mammonek

Pepper has been having some amazing adventures. First, while at an outdoor celebration with his favourite little girl, the small puppy was carried off by balloons and dropped down smack in the middle of Cat City, where puppies are anything but welcome. Risking paw and tail, his new kitty friend Cinnamon helped him escape the city and its many dangers, but now, just as it appears Pepper will finally be reunited with his little girl, he and Cinnamon cross paths with an evil black cat named Meredith, who is in possession of a magical green stone that she uses to mesmerize and control everyone . . . and they find themselves in big trouble once again!

Trapped in a cold basement by Meredith and her fiancé, Zoltar the “magician, the friends are forced to rehearse to the point of exhaustion in preparation for Meredith’s “new show.” Will they ever manage to escape? Will Pepper ever find his way back home? Or will they become the hottest new act in show business ... against their will? Only time will tell.

M. Mammonek has always had a love for reading and the arts. She studied art history in Pretoria, South Africa; Architecture in Gdańsk, Poland, and has a Bachelor of Fine Arts degree from the University of Regina. These stories were inspired by her love of animals and the years she spent taking care of her amazing daughter and looking after her and her friends.

When Mammonek is not writing, she enjoys reading, travelling, cooking, drawing, glass making, painting, and creating digital art. She currently lives in Saskatoon, with her husband and their three English Mastiffs.

Princess & Troll: Once Upon a Time on a Bad Hair Day

Arabelle the Queen of Pirates: Arabelle and Kraken.