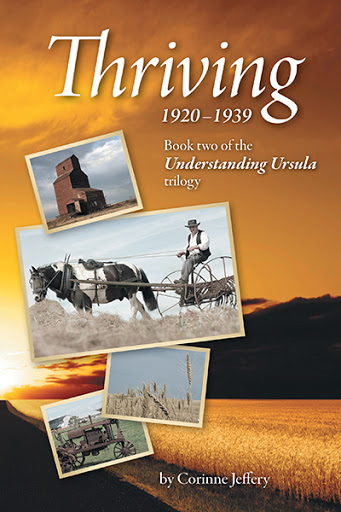 of the challenges of the intriguing and contentious Werners, a family of German Lutheran

homesteaders on the Saskatchewan prairie. Become reacquainted with their dynamic lives

to endure the hardships of the Great Depression.

With the return of prosperity to the Canadian prairies, Gustav Werner resumes his insatiable

quest to acquire more prime farmland. Still, no one is more surprised than he when his

hand is forced and his future reshaped by increasing drama and secrets. He wonders why

he is persistently entangled in compromising family relationships, and then tragedy, until

he begins to doubt his faith. When Mother Nature, in which he has always found peace

and solace, too becomes his enemy—sending drought, grasshoppers, hail, and fierce winds

that lift the rich topsoil off his land—he starts to despair. Steadily, though, his sorrow and

his resolve to push onward for all those who count on him.

Corinne Jeffery was born in Saskatchewan in 1945 and raised in Manitoba from the age of five. A graduate of the Brandon General Hospital School of Nursing with a Bachelor of Nursing from the University of Manitoba, she is a former educator with Grant MacEwan College in Edmonton. After many years in Winnipeg, she moved to St. Albert, Alberta, where she has been a longtime resident with her husband and family. Thriving: 1920-1939 is her second novel.