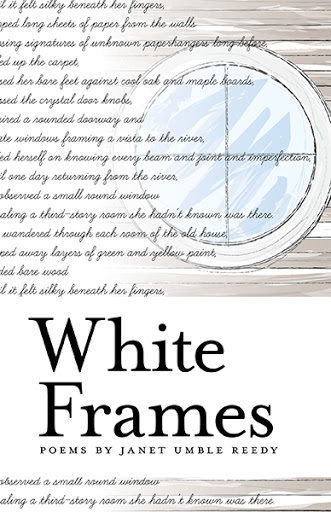 The big boys picked up long sticks and whittled them

to a fine point with sharp pocket knives. We pierced the points

through the hot dogs and held them over hot coals

until they blistered, then slid them into soft white buns.

The milk cans from Uncle Ray’s barn, full of ice and lemonade,

are sitting on the picnic table, beads of cold water running down the outside

like sweat on the boys’ faces when they played baseball.

Janet Umble Reedy details with sensual simplicity the stages of her life and heritage in White Frames. Like the crops that they sow, the generations of the poet’s relations and subjects come and go in their season. Written and accumulated over a life lived on three continents, Janet Umble Reedy’s poems move through a landscape of changing seasons, life and death, birth and blossoming, amongst the thousand daily details which make up a life well lived.

In her collection White Frames, Janet Umble Reedy tells a story firmly rooted in her own life while walking the reader along the edges that shape us all -- the tales of those who came before, the places we do not belong, the sacristy of nature. Her poems invoke the conviction that the past is always with us, and that, no matter our time or our place, goodness is always at hand.

Sojourner, storyteller, spy, mystic -- these are words that come to my mind as I read the poems of Janet Umble Reedy in White Frames.  The poet moves through the world and observes what is spectacular in the ordinary and at the same time discovers what is familiar in the exotic.  The result is an evocative collection of poems with staying power for the reader.  I know I'll keep coming back to them.

Poet and author of The Haiku Box

Janet has had poems published in Huron River Review and Third Wednesday. She grew up in the Midwestern United States and has since lived in Greece and Southeast Asia. She and her husband Stan now call Washington, DC their home. This book is especially for her children and grandchildren.