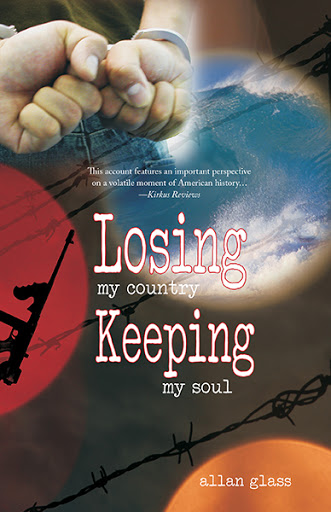 Losing My Country, Keeping My Soul
by Allan Glass

It was 1967, and life in America was the best. I lived and surfed in Miami, Florida, where the waves were as big as the bikinis were small, and every day was another party. The war in Vietnam was an abstract thing. We all knew it would be over soon. I thought I would be riding my surfboard forever, but the US Army had other plans. Without any warning I was drafted, forced into a conflict I neither understood nor believed in. While others went off to be slaughtered, I went AWOL. What followed was a two year journey of love, despair, murder---losing my country, keeping my soul.

In this debut memoir, a writer narrates his last summer before being drafted and the staggering choice he soon faced. —KIRKUS

Glass skillfully captures the tense mood among forced recruits, watching those who resisted get dragged away. —KIRKUS

Losing My Country, Keeping My Soul is Glass’s wartime story dramatizing the lengths to which he went to remain morally untarnished and free from guilt. —CLARION

Losing My Country, Keeping My Soul is Allan Glass’s insightful memoir of escaping to Canada to avoid the Vietnam draft. —CLARION

The writing is evocative, whether Glass is describing carefree days surfing, scuba diving, and crabbing in crystal clear bays, or hearing Walter Cronkite’s authoritative voice describe the Tet Offensive. It brings bonfires to life and sheds light on the narrator’s inner psycho- logical turmoil; he cannot reconcile himself to killing or being killed. Glass captures his feelings of confusion over the war and his fears about landing in jail. —CLARION

Dialogue is recreated in exacting, believable detail that has the ring of truth.” The narration hits heights of vividness, at key junctures, as when Glass decides to go AWOL, and when he hikes across the Canadian border. —CLARION

His is a gripping account of dodging wartime service and starting a new life abroad. —CLARION

Allan Glass was born in Miami, Florida. The family moved to Puerto Rico in 1952 where he started school. After returning to Miami, he graduated from Archbishop Curley High School in 1965 and entered Miami-Dade Junior College. A year and a half into a two year degree in Accounting/Business his love for a woman from New Jersey took him away from the classroom. Soon, without warning, he was drafted and was shouting, "Sir, yes sir!" After four months of training, and one month of leave, Glass was given orders for Vietnam. Glass flew to San Francisco, California, awaiting to be flown out to Vietnam. Instead, Glass went AWOL, and over the next year, was in and out of uniform, jail, always on the move.