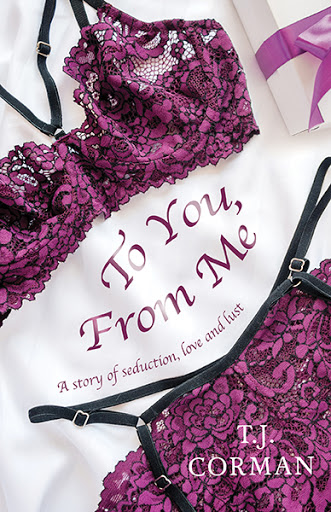 To You, From Me
A story of seduction, love and lust
by TJ Corman

Virginia (Ginny) Alexandra Parker owns a curio shop in the world-class ski village of Whistler, British Columbia. Having lost her husband in a tragic car accident early in her marriage, Ginny raised their two daughters alone, remaining loyal to her late husband’s memory. Numbed by grief, Ginny has reached mid-life without knowing the pleasures of a relationship with another man.

Enter Mike Monroe. Vastly wealthy and tremendously sexy, Mike has awakened a sexual longing in Ginny that she hasn’t felt in years. He wants her, and she wants him, but she is afraid to act on impulse. Aphrodite sits on Ginny’s shoulder and coaxes her along, but Ginny’s long time celibacy, shy nature, and fear of the unknown keep her from moving forward.

Supported and encouraged by her two best friends, Jessie and Paul, who have been a steady presence in her life since high school, Ginny feels she might, at last, be ready to explore the world of dating and begin a relationship with Mike. But memories surface, filling Ginny with conflicting feelings about dating, her future, and unresolved events from her past. Is she ready to pursue a relationship with Mike? Or is there something else competing for her heart?

To You, From Me is a humourous, poignant, and sentimental story of one woman’s experience as she finds the courage to reconcile deep heartache and loss. It is an exploration of long-lasting friendships and the power of love.

T.J. Corman is passionate about the rights of girls and women. She fervently believes that contrary to our culture’s obsession with youth, women should not be defined by or held back by their age. She felt the need to tell a story of strong, vibrant, beautiful women who are exceptional because of their age, not in spite of it, and yesthey also have ful lling love lives! She is a living example that life begins at fifty. T.J. is active in her community. If she is not hiking along a forested trail, she is cycling down a country lane. Friends who are lucky enough to catch up with her can enjoy a homemade gourmet meal at her table. Her zeal for life is contagious. When not hiking or cooking, she splits her time pursuing her other greatest passionswriting and travelling. T.J. currently lives in British Columbia, Canada, with the two loves of her life, her husband and her dog.