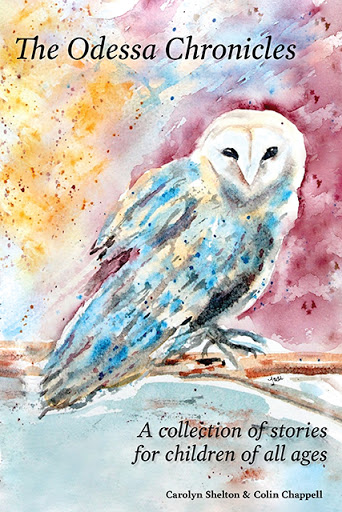 Odessa is a Barn Owl with an attitude, who befriended Jaxon (a magical Jackalope). The two of them met Dewey (a cat with all the usual cat characteristics based around a desire for a life of luxury), and the three of them moved into an empty farm.

Joshua Pebblestone bought his dream farm. His life was now going to be spent immersed in the peace and quiet of rural life, but then he found that he had three lodgers! Jaxon worked his magic which allowed them all to communicate with each other and, by some cunning feline manipulation, Joshua was soon known as the man-servant!

The man-servant had no idea how full of adventures and humor his life was to become, with the antics of his three lodgers. He also had no idea that they would quickly steal his heart and be his best friends!

Kids of all ages will enjoy following these unusual friends as they adventure through life together. Their crazy escapades and pranks are irresistibly entertaining while their unlikely friendship will tug at your heartstrings. - Amazon Customer

Carolyn and Colin have developed a human, barn owl, cat, and jackalope (that mythical creature that is part jack rabbit and part antelope) into a delightful crew that live and adventure together. The forty-seven fantasy stories will amuse and delight younger listeners, and readers of all ages. - Amazon Customer

Carolyn Shelton lives in the small town of Chambersburg, Pennsylvania with her wonderful husband and two amazing teenagers. Lassie and Lilly, a Sheltie and Yorkie, and 3 playful ferrets, are their lovable pets.

Carolyn's love for books started at a young age. She has always enjoyed writing, but the passion was sparked again when starting a blog a few years ago. Her blog spreads smiles and encouragement through humor and inspirational posts. Talking with Odessa and the gang always makes for a fun experience. They may make her life crazy at times, but they have also filled her life with love!

Colin Chappell is a retired Canadian with an over-active imagination. He lives in Oakville, Ontario with his partner Carol, and 80lbs of rescued German Shepherd/Rottweiler (aka Ray). His greatest challenge with these stories was to keep the four characters on track, because they constantly took the original idea and tried to take it in different directions!

He has written two other books:

"Who Said I was up for Adoption?" is a book which documents the first 18 months of living with Ray (see above). It is best described as an emotional roller-coaster ride, but unlike most dog stories, Ray is still alive and well!

"Just Thinking" is book of simple poetry covering life with Ray, relationships, life's journey, people of the street, and other thought provoking pieces. It is a little book, for when you have a little time, with some little writings, which may produce some little thoughts.