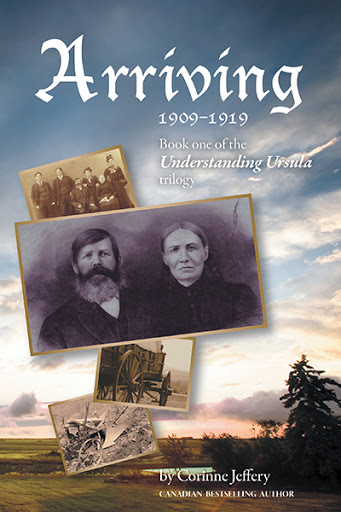 Arriving, book one of Corinne Jeffery’s Understanding Ursula trilogy, vividly recreates the pioneer world of the Canadian prairies with a multitude of memorable characters. You’ll lose yourself between the pages as you watch them struggle to survive and flourish, always at the mercy of Mother Nature and the ever-changing seasons on the unfettered plains.

On July 1, 1909, the day after his eighteenth birthday, Gustav Werner takes the inaugural ride on the Grand Trunk Pacific Railway between Melville and Regina, to apply for a homestead grant at the Dominion Lands Office. He is eager to become the most thriving homesteader in the townships of Neudorf and Lemberg, Saskatchewan, set aside for Gustav’s people, the German Lutherans, by Sir Clifford Sifton in Canada’s “Last Best West” land deal. What he doesn’t realize is that beyond becoming a man and a landowner, life as he knows it is about to crumble from his grasp. Family drama and conflict plague Gustav as he learns English—the language that sparks hatred in his staunchly traditional father, Christian—and discovers that his parents have arranged his marriage to sixteen-year-old Amelia Schweitzer.

of The Garneau Block and Toby: A Man

Sharrie Williams, author, The Maybelline Story—and the Spirited Family Dynasty Behind It

“ I can readily see this on screen!”

Leon Logothetis, reality TV show producer and author, Amazing Adventures of a Nobody

“ A raw and racy Little House on the Prairie. Can’t wait to read the sequel!”

Corinne Jeffery was born in Saskatchewan in 1945 and raised in Manitoba from the age of five. A graduate of the Brandon General Hospital School of Nursing with a Bachelor of Nursing from the University of Manitoba, she is a former educator with Grant MacEwan College in Edmonton. After many years in Winnipeg, she moved to St. Albert, Alberta, where she has been a longtime resident with her husband and family. Arriving: 1909–1919 is her first novel.