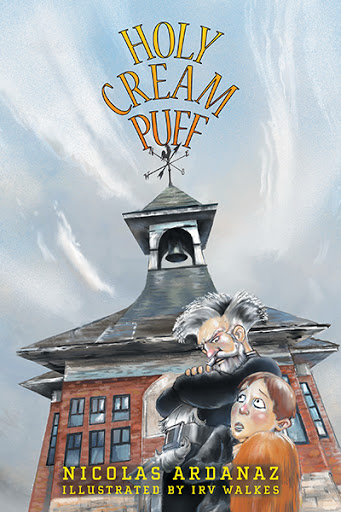 Holy Cream Puff recounts the incomparable encounters of a young boy who revels in the joie de vivre of Maisonneuve, an East End of Montreal francophone community in the 1940s and 1950s.

Charged with an abundance of humorous and mischievous ploys ready to be ignited at a moment’s notice, Nicolas, his admirable dog, and their jovial gang form a unique bond to support one another.

You will discover how Nicolas deals with the many challenging moments of his life:

Amusing: “We bombarded them with snowballs

against their counter attack.”

Suspenseful: “The ghastly silence of the night was

frightening. The sounds of the attendants unloading a dead body

The monster that swallows kids that don’t speak English, I thought, trembling.”

Nail-biting: “With one-minute remaining, the score was tied 2-2.

vibrated right down to my bones.”

Heart-breaking at times: “The taxi drove off. I yelled hysterically.

My dog’s eyes opened for an instant. He panted and gasped to regain

misjudge anyone. He dealt with everyday living with dignity. I discovered

Michel’s IQ was higher than the rest of us average guys.”

Contesting life lessons: “You know papa, the more I learn about God

at school, the more confused I become.” “I don’t always understand either

my son. The mysteries of life are exactly that, a mystery.”

Dr. Nicolas Ardanaz, the son of Spanish and Basque parents, was born and raised in East End Montreal. He is a graduate of Université Laval, Québec City. He crowned forty-five-years of his career in Education in Canada and Europe as the Superintendent of Schools of the Conseil scolaire francophone de la Colombie-Britannique. He is the proud grandfather of six wonderful grandchildren and resides in sunny Tsawwassen, British Columbia, Canada.