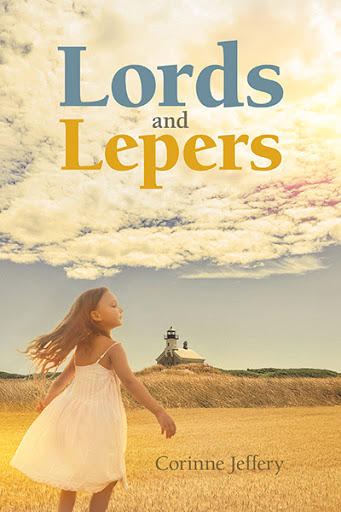 Lords and Lepers
by Corinne Jeffery

Six-year-old Francine Stonehenge lives with her parents near the ocean in Cavendish, Prince Edward Island when the unthinkable happens: both her parents drown. Her aging uncles, whom she has never met, take her by bus, ferry, and train to live with them on their sheep farm in Manitoba. As she settles into her new home, Francine remains traumatized by the death of her parents, for which she feels responsible. Even the pristine peace and stillness of the prairies doesn’t keep her recurring nightmares at bay. With the loving support of her uncles and new stepmother, Francine builds friendships and before long, becomes one of a foursome with Cassandra Jamison, Jessica Yang, and Hope Harding. This epic prairie saga tells stories of bullying, elopement, prodigious talent, fraudulent greed, heartbreak, death, joy, and deep love. As the girls lose their innocence and mature into young women, they forge lifelong friendships; share the pinnacles of success; the depths of despair; and, experience how all too often people are valued for what they have or what they do, rather than for who they are.

"Lords and Lepers is an engaging period piece with protagonists whose stories are not easily forgotten." -Foreword Clarion Review

CORINNE JEFFERY is the author of the bestselling Canadian historical fiction trilogy Understanding Ursula. The titles, in order, are: Arriving: 1909–1919 (2011); Thriving: 1920–1939 (2012); and, Choosing: 1940–1989 (2013). A graduate of the Brandon General Hospital School of Nursing with a Bachelor of Nursing from the University of Manitoba, she is a former educator with Grant MacEwan College in Edmonton. After many years in Winnipeg, she moved to St. Albert, Alberta, where she has been a longtime resident with her husband and family. Lords and Lepers is her fourth novel.