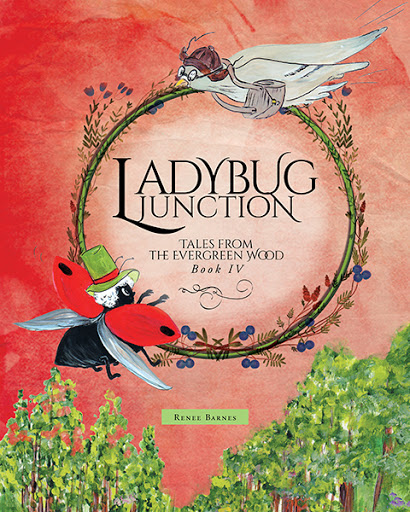 A wave of terror ran through Mayor Essenfeld as he received the news that the crows were on a rampage. Their goal was to destroy all the tiny insect villages within the Evergreen Wood.

The mayor was frantically trying to consider his options when Spike the turtle appears and offers his assistance. Spike suggests that they go over to see Katrinka and the other forest friends. He believes that with everyone helping, they will be able to find a solution and save the insect villages.

The mayor and the other ladybugs pile on Spike’s back for a rather wild ride to Katrinka’s house.

The mayor was happy to see that so many friends were already there and quickly reveals the terrible news. Katrinka remembers that she had heard of a giant spider with the ability to spin enormous webs with unbelievable strength. She thought that if this spider could spin a large and very strong web over the entrance of Ladybug Junction the crows would be stopped. The problem was that no one really knew where this mysterious spider lived or if he would even consider assisting them.

However, armed with courage and a great deal of faith, the little band of friends, led by Katrinka the frog, Kopan the wood fairy, Winslow the owl and Montebello the mushroom, along with the other forest pals, they fearlessly depart to pursue what could prove to be a very dangerous mission.

Armed with loads of creative imagination, Renee Barnes launched what she calls "the encore of her life." After a successful career as an interior designer and art teacher, she takes her talents to another level by writing and illustrating children's books.

Encouraged by her friends and family to write stories to go with her little characters, book one turned into book two and then three and so on. Book V and VI are also in the works.

Her series, "Tales From the Evergreen Wood," brings together these little forest characters as they meet challenges, solve mysteries and secure the bonds of everlasting friendships.

She makes children's presentations with puppets, art and of course, her stories. Libraries, art centers and several woman's groups as well as charity organizations have enjoyed Renee's lectures and presentations which are always stimulating, encouraging and full of humor.

She is available for lectures to senior groups as well as children's presentations. She may be contacted through her website.