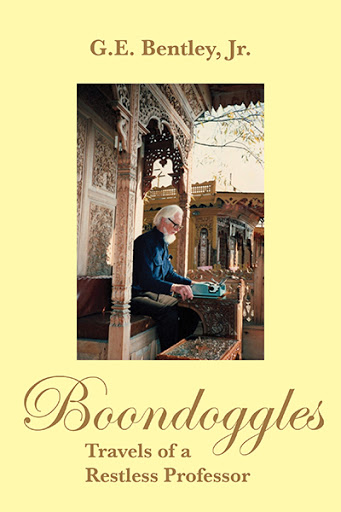 Boondoggles
Travels of a Restless Professor
by G.E. Bentley, Jr

One of Jerry’s greatest talents was creating research pretexts to travel to the far corners of the globe. He explored England and continental Europe, first as a student and later when he returned regularly for research. Once he had settled into his career at the University of Toronto, Jerry sought adventure with his young family while teaching for a year in places which did not at the time attract many Western academics - Algeria in the 1960s, India in the 1970s, China in the early 1980s. In each of these places he found expectations about teaching, university administration and social interactions vastly different, often baffling, and always entertaining.

The volume concludes with three essays in which Jerry chronicles his academic endeavours, as a scholar of William Blake, forms the basis of the most important collection of Blake works in Canada.

With eloquence and humour, Jerry brings to life in Boondoggles the people he met and the grandeur of the places he visited, as both a restless professor and an endlessly curious observer of human nature, long before the era of mass tourism made such travels commonplace.

–Karen Mulhallen, Papers of the Bibliographical Society of Canada, 1996

Professor G.E. Bentley, Jr. (1930-2017) was a prolific scholar specializing in William Blake. He was also an inveterate traveller and raconteur extraordinaire. His stories about his travels around the world are collected here. Many of these trips were what he defined as boondoggles: being paid to do something you want to do anyway. In all his travels his resourceful companion was his wife Beth, who shared his sense of discovery and his joie de vivre.