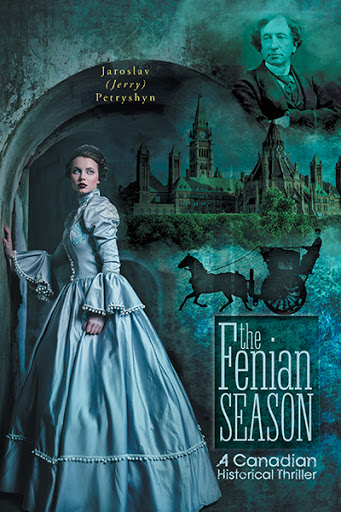 This fast paced historical thriller takes place against the background of a rising Fenian movement in the United States and the overt hostility of Washington toward the ‘Canadas’ immediately after the American Civil War. The Fenian Brotherhood was dedicated to the freeing of Ireland from ‘British tyranny’. Conquering Britain’s holdings in North America (and coincidently preventing Confederation) was their aim.

A Canadian agent in Buffalo uncovers a Fenian plot against the ‘life and liberties’ of the United Province of Canada that was to take place on or about St. Patrick’s Day, 1866. However, he meets with foul play before he can pass this information on to Gilbert McMicken, Canada’s spy chief in Windsor. McMicken informs John A. MacDonald, who as Attorney-General of Canada West and the Minister of Militia Affairs, must prepare for some sort of attack. MacDonald has much on his plate and many distractions – from Confederation plans in a precarious state to a clandestine affair with Luce, a mysterious lady he had just met.

McMicken sends his best agent to Buffalo to investigate while William H. Seward, the American Secretary of State, who too has a vested interest in Fenian activities, assigns a secret service agent to ferret out what the Fenians are really up to. Alas, the two agents are working at cross purposes. From Buffalo, Washington and New York to Ottawa, Toronto and Montreal, they follow a trail of intrigue and subterfuge that comes to a dramatic climax in Ottawa and Montreal.

Jaroslav (Jerry) Petryshyn holds a Ph D from the University of Western Ontario. An award winning author, he taught history for over 30 years before becoming a Dean at Grande Prairie Regional College. He also served as the Alberta representative on the Historic Sites and Monuments Board of Canada and the chairperson of the 2005 Alberta History Centennial Project. He has published numerous historical books and a recent poetry collection: Butterfly Farmer. The Fenian Season is his first novel. He lives in Courtice, Ontario.