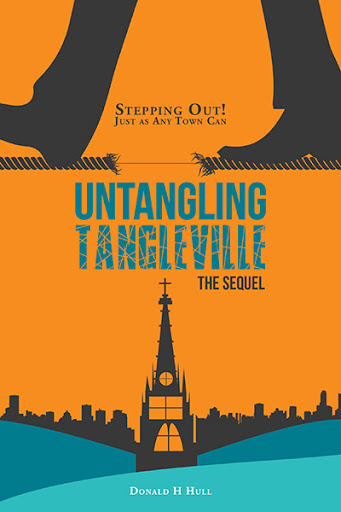 Untangling Tangleville
Stepping Out! Just as Any Town Can
by Donald H. Hull

In our modern age, Christianity and secularism have increasingly become estranged. As Christian denominations individually attempt to promote the survival of moral and ethical standards of the past, it seems David is facing the giant Goliath . . . a supposedly losing battle. However, the followers of Christ in Tangleville discover that working together as a Christian Coalition, the giant is not quite so formidable as first thought. In the wake of the wild success of Harry Sting's show on AM KNOW, he and an Anglican priest, Canon Dr. Barclay Stedmore, 'walk their talk' of uniting the many Christian communities of Tangleville from their disparate factions. By ‘Stepping Out’ together rather than going it alone, the Christian denominations make swift progress on the road to collaboration and unity. Secularism's once-accepted standard of normality is usurped.

It all began in the first novel, Tangleville: Just About Any Town Anywhere which stirred up the need of co-operation amongst believers. This sequel picks up the whys, the hows, and the victory of winning . . . Stepping Out! Just as Any Town Can.

Some of the town's residents were not amused!

Canon Dr. Donald H. Hull is a retired Anglican Priest in the Diocese of Huron residing in Windsor, Ontario. Before ordination, he taught mathematics at the secondary school level in Ottawa.Upon obtaining his M.Div. degree from Queens University Seminary in Kingston, he served as a parish priest for many years in downtown Windsor. Following the earning of a D.Min. degree from Ashland Theological Seminary in Ohio he became Principal of Canterbury College on the campus of the University of Windsor, teaching New Testament Studies. Untangling Tangleville: Stepping Out! is the sequel to his first novel entitled Tangleville: Just About Any Town Anywhere.

Untangling Tangleville has been nominated by our staff as one of their favorite books.