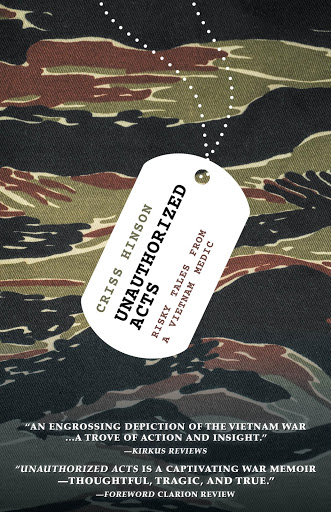 Medic Criss Hinson had been in Vietnam for only four days when unauthorized, he joined a flight in need of a medic to help transport wounded back to Da Nang. The plane was hit by machine gun rounds and forced to land in nearby rice paddies. Its passengers included four Green Berets, who along with Criss and the other men aboard had to fight a deadly battle with a Viet Cong patrol to reach a Marine outpost. Because of his varied skills and performance under pressure, for the rest of his tour in Vietnam, Criss was part of many dangerous missions, some outside the military’s standard rules and regulations, and eventually he became a go-to medic for the legendary Air America. With wit, brash humor, vivid expression, and richly expressed feeling, Unauthorized Acts takes the reader on a roller coaster ride of missions, rescues, field duties, hospital assignments, and sudden shocking horror juxtaposed against the ordinary or ridiculous. Hinson recreates the war from a fresh and unusual perspective that is revealed to the reader in a sometimes unsettling, hilarious, or often profoundly moving way.

“An engrossing depiction of the Vietnam War...a trove of action and insight.” 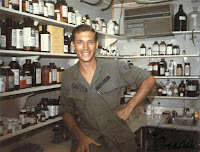 Criss Hinson was raised in North Carolina, joined the local Army National Guard at the age of seventeen, and transferred to the regular Air Force three years later. Before his March, 1967 assignment to Vietnam, he worked as a hospital medic at Travis Air Force Base in California, where he met his future wife. After returning to the States in 1968, Criss stayed in California, got married, went to college, and became a geologist. He and his wife traveled to job sites throughout the western United States, living in a 35-foot- long, fifth-wheel trailer. They were accompanied by a two-hundred pound Saint Bernard and two Persian cats. They both, eventually, sort of retired and moved to Washington State, always sharing their home with an assortment of inside pets and outside animals. Unauthorized Acts is Criss’s first book. Until now he has never discussed his tour of duty in Vietnam…not even with his wife.

Unauthorized Acts has been nominated by our staff as one of their favorite books.