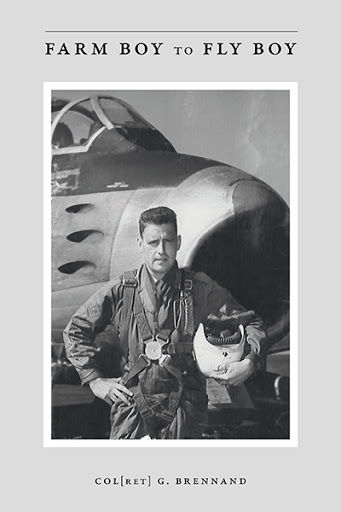 From his childhood growing up in Depression-era rural Manitoba to his rise through the ranks to become a colonel in the Royal Canadian Air Force (RCAF), Col Gordon Brennand’s memoir, Farm Boy to Flyboy, is as much a history of the RCAF in the twentieth century as it is an account of his own life. Born a bit too late to participate in WWII, Gordon was inspired by Canada’s involvement in the Korean War to pursue a life in the military. After a failed start in the Navy, he enlisted with the Air Force with faint hopes of perhaps becoming a fighter pilot. Not only did he succeed, he logged four thousand hours on various jet aircraft types including over 1100 hours on the F-86 Sabre, which was the state-of-the-art fighter jet throughout most his thirty-four-year career, not to mention hundreds of hours on various other types of aircraft. He experienced several close calls during that time, including one incident when he had to eject and another when he had to force land due to engine failure. He went on to command two bases and has spent time living in most Canadian provinces as well as Germany, where he served for three years during the Cold War. Fascinating and insightful, this book will appeal to those who are fascinated by the military and flying as well as those who are simply seeking a first-person account of what life was really like for the men and women who served in the RCAF throughout one of the most pivotal periods of twentieth-century history.

Born and raised on a farm near the village of Manson, MB, Gordon Brennand knocked around at several jobs and potential careers, never really finding his niche until he enlisted in the RCAF. Though he insists he was not a natural pilot, merely “average” at best, the RCAF must have seen something else, because not only did he log thousands of hours on all sorts of aircraft, he also served as a flight instructor and then as the commander of two air bases. Following his service in the RCAF, which took him across Canada and to many other countries around the world, Gordon returned to his farm boy roots and began a cattle-raising operation near the very land where he grew up. Since retirement, he has remained active in various organizations and activities, including the Legion, and has attended several reunions with his fellow Sabre pilots. He and his wife, Evelyne, live in Virden, Manitoba. This is Gordon’s first book.