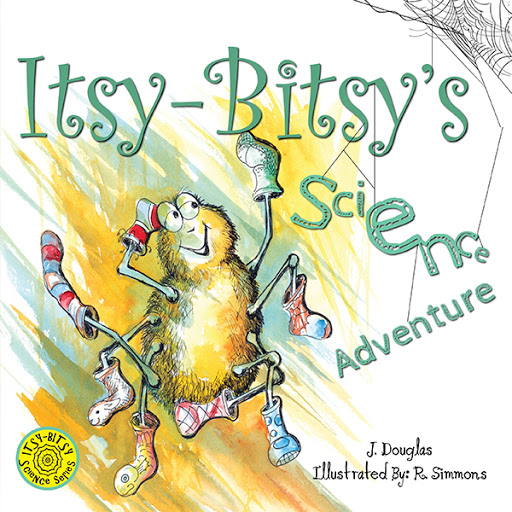 When Itsy-Bitsy goes for a walk, it becomes a science adventure. Along the way, Itsy discovers what type of animal each of his new friends is … and has a great day, even when his feet get cold!

“A lonely spider goes for a walk and learns characteristics of insects and mammals in this first picture book of a planned series. The “Itsy-Bitsy” spider of nursery-rhyme fame is lonely, now that the rain has gone away, so he takes a stroll. He meets six-legged insect Ms. Fly; amphibious Willy, a salamander; and Goldilocks and the three bears, who note that they’re ‘called MAMMALS because of our fur.’ ... A sweet-natured, science- themed book”

J. Douglas lives in Ontario, Canada with her husband and two young children. She has a Bachelor’s degree in biology and has worked as an environmental consultant for the past ten years. Douglas has always loved science, bugs, microscopes, and playing in the dirt, and she wants to get children excited about science. She believes that science is all around us, and it isn’t difficult to learn—but exciting to uncover!

All too often science isn’t introduced until it’s labeled as “too hard” or “uncool.” Douglas’ work showcases that science can be taught very young and that it doesn’t need to be taught by a scientist.