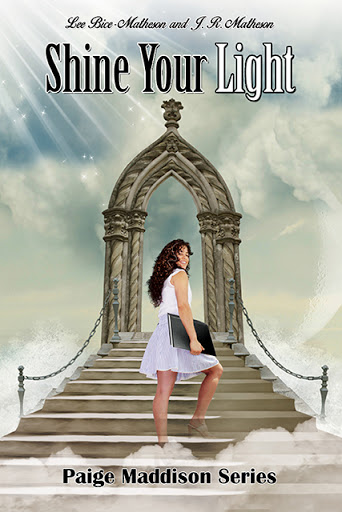 Shine Your Light
by Lee Bice-Matheson and J.R. Matheson

Paige Maddison is only 17 years old, but many know her spirit is ageless. She holds the gift of seeing beyond the layers of our reality, the courage to battle the evils that threaten to tear those layers apart, and the key to an ancient mystery that will decide the fate of the spirit realm, and our own, for another century.

In Shine Your Light, the third book of the Paige Maddison series, Paige finds herself precariously balanced between the mortal and spiritual realms, even while being haunted by events of the past. Surrounded by powerful allies, old and new, she discovers the true power of friendship―and the impact of its betrayal―as she faces her greatest challenge: the Prince of Darkness himself. The Ultimate Evil.

When a black moon looms over All Hallows' Eve, and the battle for control of an ancient Grimoire threatens to destroy the world as we know it, Paige will be put to the test. Will love and goodness win the day? Will the strength and magic of her Celtic ancestry, the First Nations People, her Spirit Wolf family, or even divine intervention be enough to help her prevail?

Paige’s visions tell her that she is the Chosen One―chosen by fate, God, or perhaps the universe itself ... but is she worthy? The ultimate battle between fallen angels, humanity, and the upperworld is about to be fought on Earth’s battlefield.

What if they've made the wrong choice?

Shine Your Light is a delightful and insightful novel... It beautifully describes the incredible adventures of the youthful Paige Maddison...wise beyond her years ... she communes with the spirits of Archangels Michael and Raphael, King Solomon, Grey Owl, and even the dreaded Beelzebul! Paige is a well-rounded...the Nancy Drew of the realm of high spirits and dreams and visions. In my opinion, it is "a keeper." John Robert Colombo, Author and Anthologist

Lee Bice-Matheson began her writing career as a storyteller, often weaving tales for her son, J.R. Matheson. Her stories parlayed into a writing career that was united with her son's creative imagination, as a mom-son writing team. It was her dream come true! Lee is proud to say they have coauthored Destiny's Gate, Book Two, and Shine Your Light, Book Three. Lee is also the author of Wake Me Up Inside, Book One, in the Paige Maddison Series. It was the recipient of the Literacy Award from the Readers' Advisory Panel, Orillia Public Library, and the Paige Maddison Series continues to be included in the Battle of the Books, Simcoe County. Lee is passionate about spirituality, and all it encompasses. She loves spending time in nature, and canoeing and portaging into Algonquin Park with her husband. Lee has degrees in Honours History, Master of Library & Information Science, both from Western University. She has worked in public, medical, and corporate libraries, and now works proudly with her husband, Kevin, in their Chiropractic Clinic.

J.R. Matheson has been writing fantasy and horror since he was old enough to hold a pen. Collaborating on the Paige Maddison Series has reignited his passion for creative writing. When he’s not weaving tales with his mom and coauthor, Lee Bice-Matheson, he can be found drowning in scientific publications and talking incessantly about his research at the Centre for Addiction and Mental Health (CAMH) in Toronto, Ontario, where he is a pharmacology PhD student. Some may claim that science and the creative arts are at odds, but J.R. feels they are one and the same.