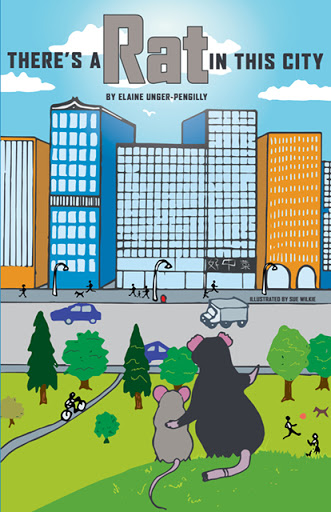 Are you up for a hairy ride and some chuckles on the side? Rat and Mouse (characters from my book entitled RAT) face new adventures when they are booted out of their ideal summer home on a farm. They are forced into the city where they meet an interesting cast of characters: mean gangster rats, gophers in an underground community, gum-chewing fashion rats and fast food junkies, among others. As Rat and Mouse explore a garbage dump, a retirement home, a city park, a computer store, a golf course, and even a toll-free mini subway safety and dehydration remain life-threatening concerns.

Along the way Mouse experiences love and addiction, while Rat learns a thing or two about his own personal limits and what it means to be a friend. Even though Rat thinks he knows it all, he finds that he does have to rely on his little mouse pal to survive some strange predicaments.

Pick up a copy of There's a Rat in This City for a tale of fun, fright and action.

"Rat and Mouse are unique, flawed and entirely relatable protagonists. Throw in a motley crew of colourful characters and we're in for a wild ride...All in all, it's a grand adventure fit for the big screen!" by Molly Ashlie (manuscript editor)

When Elaine moved to the city of Lethbridge, Alberta she took Rat and Mouse with her. She and her husband have a mini schnauzer that gets more attention than most humans.

Elaine's love of literature, music and gardening have also moved to the city, though the gardening is on a much smaller scale. She also writes songs and poems and insists on a daily dose of fitness.