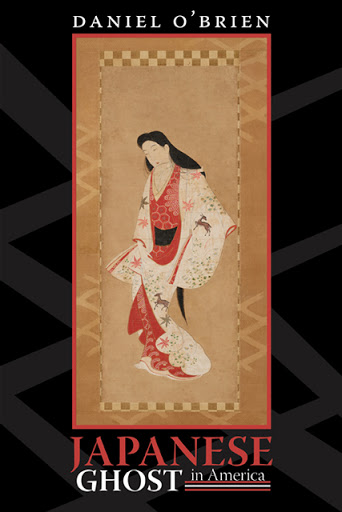 Jimmy, an introspective and world-traveled social studies teacher, lives a quiet life working in a Minnesota high school. Having lived in Japan for several decades—a country that he considers his second home—he is caught off-guard by the ancient and unfinished legacy that has followed him back across the Pacific.

As the sun sets, Jimmy begins to see strange events in his home: a disembodied hand in the moonlight, then the full apparition of a Japanese woman in traditional kimono. Despite being separated by the boundaries of time and space, life and death, Jimmy and the mysterious woman discover a karmic connection. Together, they search for the root of her eternal restlessness in the hopes of attaining her redemption. Jimmy must unravel her past to discover how their destinies are intertwined, and how they might heal one another.

O’Brien’s Japanese Ghost in America is not only a gripping and suspenseful read, but offers more on many levels. Ghost story—romance—cultural history—Buddhist spirituality: all keep the fascinated reader racing from first page to last. Jimmy and a most unusual Ghost journey together toward redemption, as their interwoven characters interact through revelation and recognition. And along the way, we are treated to O’Brien’s deep and sensitive knowledge of Japan, creating a graphically realistic context. A masterpiece, destined to become a classic!

Comparative Literature, and other journals.

This intriguing story was born from Daniel O’Brien’s years of study of Japanese language, history, and culture. His writing reflects his deep knowledge about and sincere respect for Japan and the Japanese people. The reader will be absorbed

in a journey where Jimmy, a protagonist, and a Japanese ghost seek their own “redemption” together.

Department of Asian Languages and Literatures,

Daniel O’Brien is an author, teacher, and world traveler. Fascinated by international cultures, Daniel holds an MA in Advanced Japanese Studies and has explored extensively throughout East and Southeast Asia. Having lived in Japan for twelve years, he fostered a deep knowledge of and respect for Japanese culture, which he now channels into his Eastern Thought high-school class. As the founder of a local collective, Daniel leads a group of authors as they converse and share their work in order to flourish together. He also serves on the board of a meditation and study center, as well as served on the Arts Consortium of Carver County Board as their Literary Liaison. Daniel published his first book, Star Points: Connections Old and New in 2011. Japanese Ghost in America is the first book in his forthcoming Japan Series, which will seek to enlighten readers about Japanese culture through the lens of an American protagonist. Daniel currently lives in Minnesota with his wife and dog, spending his free time walking, camping, and participating in the local art community.