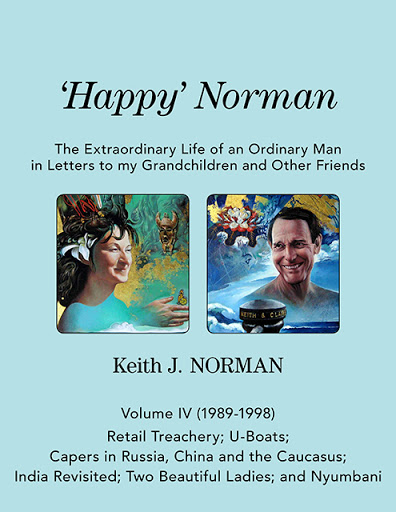 Volume IV of Keith Norman’s expansive and absorbing life story takes readers through the period 1989 –1998. Keith is already in his sixties, an age when most of us are thinking about slowing down, but Keith, if anything, is speeding up! This period of Keith’s life encompasses profound personal events and challenging business dealings.

He faces the trauma of cancer, contracted by his wife and soulmate, Claire, which they must face together, in the midst of a punishing schedule, as well as the joys of discovering not one but two long-lost daughters.

Keith’s consultancy business, Norman International, takes him around the globe, from China to Russia to the USA and from the UK to Africa, as he pursues various public and private ventures: the formation of a golfing equipment franchise, Nevada Bob, in the UK; the raising of a fleet of old WWII German submarine fleet; a program for the training of African business managers, and the creation of development funds for the newly emerging independent republics of the former Soviet Union alongside international financial institutions, the World Bank (IFC) and the European Bank for Reconstruction and Development (EBRD).

These are just some of the exciting ventures recounted in this latest volume. They are interspersed with personal anecdotes about family and friends, which demonstrate Keith’s innate love of life and consuming curiosity to experience all that it has to offer.

Readers will continue to benefit from Keith’s honest appraisal of his own actions and decisions as well as the actions and motivations of others with whom he must deal.

Settle in, buckle up, and enjoy the ride!

Born to professional middle-class parents in the UK and forced to take on the mantle of adulthood at an early age during the turbulent years of World War II, Keith Norman developed an independent spirit and an inner drive that served him well throughout his business career. “Happy” was his only nickname given by his army peers that carried him through a life full of attainment, danger, integrity and never-ending curiosity about what lay around the corner.

Degrees from London, Cornell and Harvard served as a strong foundation, enabled Keith to achieve so much as a tireless entrepreneur and contributed by generously sharing his vision, skills and experience. His bold optimism and unrelenting energy took him around the world from positions of authority (UKAEA/World Bank-IFC) to the most adventurous and speculative enterprises and in the company of colourful characters, many of whom became friends, or partners.

Despite ups and downs and several fortunes gained and lost along the way, Keith’s confidence in his abilities never wavered, and he was always ready to tackle the next opportunity. The projects he was involved ranged from engineering to finance, banking to turtle farming, mining to wine clubs, setting up retail franchise to prop- erty development.

Keith’s current challenge is to continue writing a ‘no holds barred’ account of his extraordinary life Prone to self-reflection, Keith analyses the inner reasons for the course his life had taken, both in business and in his own personal decisions.

Anyone who studies contemporary history or those who aspire to succeed in life without selling out their values and dreams should read this book which is far from over....