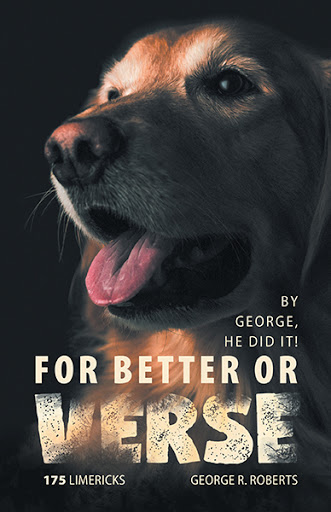 For Better or Verse
by George R. Roberts

On the front cover I noted that first impressions are important. But, what about lasting impressions? Are you now a fan?

The definition of a limerick: “A humorous five line poem with rhythm scheme: AABBA. Three lines “A” have a beat or rhythm of eight and they rhyme (sound the same). Two lines “B” have a rhythm of five and they too sound the same.

TO GET YOU, THE READER, STARTED – HERE’S A BAD EXAMPLE:

“There once was a guy they called Jack (8)

Who people preferred to call John (8)

To make this thing rhyme (5)

For Better or Verse – have fun!

George R. Roberts lives in Victoria, British Columbia having moved from Toronto, Ontario in 1954. As a result of service in World War II, the government sponsored his high school Grade 12 and a Bachelor of Commerce degree from the University of Toronto. He then articled and became a Charted Accountant with the Ontario Institute of Charted Accountants.

George worked for five years with the Revenue Canada Agency in Victoria, and then opened up a private practice. The practice was sold in 1967 when he bought a travel trailer and the Roberts family drove to EXPO 67. His real passion, however, was music: tenor soloist, piano, organ, trumpet, and vibes. This kept him out of mischief.