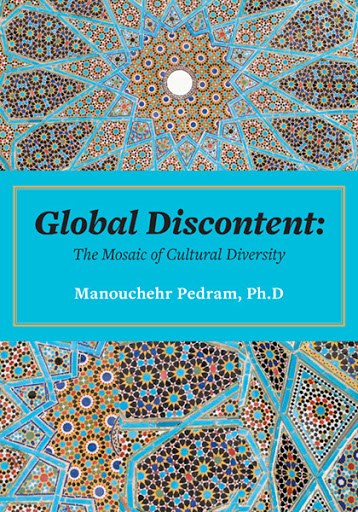 There are more similarities between the 7 billion people worldwide than there are differences, and global harmony, instead of widespread conflict, is possible. The “global mosaic” of our lives: lifestyle, culture, nationality, race, religion, gender, gender identity, ability, sexual orientation, socioeconomic level, and belief system are all tiles that can fit together to form a colorful and harmonious cultural mosaic.

In Global Discontent: The Mosaic of Cultural Diversity, Dr. Pedram provides us with a user-friendly philosophical, historical, and sociological guide to many of the issues facing the world today, and to possible resolutions toward an ideal world.

This work is an expression of Dr. Pedram’s dream: that in the twenty-first century humanity in every corner of the globe will put conflict, war, hostility, and global discord behind them and, in their place, work to create a cooperative and peaceful global community, with global governance for the common good.

Six centuries after Thomas More undertook his mission of improving and simplifying the confusion of a world filled with complexities, an unending series of wars have resulted in a recognition that wars must end now. World Courts exist and they want to be used and need to be used for mankind’s survival.

Dr. Manouchehr Pedram has stepped forward with an optimistic summary of problems that we should read about and resolve in a fashion that seeks a non-confrontational system of worldly amicability. Our younger generation should realize the wisdom of his words.

In the incredible book that follows, readers will discover social problems and solutions. The world has endured millennia of violence, power plays for land and resources, and elevation of the self above everything else. Manouchehr Pedram examines the history and current relevance of these threats. Professor Matthew Westra.

Dr. Manouchehr (Manoo chair) Pedram, founder of Global and Multicultural Education, received his Ph.D. in Philosophy, and foundation of education at the University of Kansas with a minor in political science. He also has a Law degree from the University of Tehran, Iran. His lifelong interest in teaching extended more than 35 years, with a career as a teacher and professor, in Midwest Kansas, Missouri, Colorado and Iowa.

An offer and opportunity with the Mid-Continent Regional Educational Laboratory in Kansas City, to serve on a team of five to develop the Cooperative Urban Teacher Education (C. U. T. E.) program, refocused his professional direction. The C. U. T. E. experience, involving teachers and students with diverse multicultural and intercultural community and interest in urban education, became his primary interest. The award winning, Cooperative Urban Teacher Education project, as a basic model for educating teachers of the urban inner city, was implemented in a number of colleges and universities across the United States and Dr. Pedram served as monitor for the project.

Dr. Pedram is a proud recipient of the Kansas City Mayor’s World Citizen Award, due to his deep involvement in international and intercultural activities, and his role in the United Nations Association of greater Kansas City, as president and historian. He and his wife, Sara, also are joint recipients of the Social Justice Award at the Unitarian Universalist Church in Kansas City as well as the Prairie Star (Midwest) region.

Dr. Pedram’s extended travels from Middle East to Europe, Republic of China, to Russia and Ukraine, and Fulbright study in West Africa, reinforced his view that the common element most noticeable was diversity of the human population and pride, in every instance, to be able to control self and the national and cultural destiny.

In his observation and communication with ordinary people in every opportunity, he became convinced that the common element is to be empowered to perform daily tasks, with some degree of security in one’s cultural setting. He also observed that many people around the globe find themselves boxed in, by the misery of economic inequality, domination, war, conflicts and discontent.

Dr. Pedram firmly proclaims in this book, his dream—that in the 21st century, humanity in every corner of the globe will put the conflict, war, hostility and global discord behind and, in their place, work to create global cooperation, harmony, a peaceful global community and global governance for the common good.