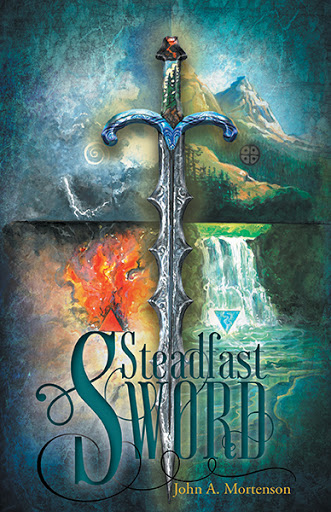 Steadfast Sword
by John A. Mortenson

It was called the Steadfast sword. In truth it was never really given a name by its creator. It was a weapon fit for the gods, and yet the gods have never seen it. To the gods the Steadfast sword remains a mystery. What vexes the gods most was that there are rumors that humans have found and used the sword. Again the gods were disappointed. All they heard was, “It was here. The hero had used it, but when the task was done, the sword disappeared without a trace.

The sword was being sought again by two competing forces. One group was made up of seasoned raiders and lead by the Iron Thegn. The warlord had plans for the sword. He would use its great power to conquer and enslave the world, then he would ascend to the realm of the gods. The other group was an odd paring of a priestess and a hunter. These two seek the sword to protect it. A thousand years have passed since anyone has seen the sword. The only source of information about the sword is a group called the wanderers.

Aerion II - One Dragon Left Behind, the sequel to Aerion and the Sword of Heroes. The young paladin and his friends fight assassins, demons, and even dragons, risking their lives for Tyr and each other.

The review of Aerion and the Sword of Heroes is in the back of this book along with one other surprise.

I have included as a bonus a short story in this book.