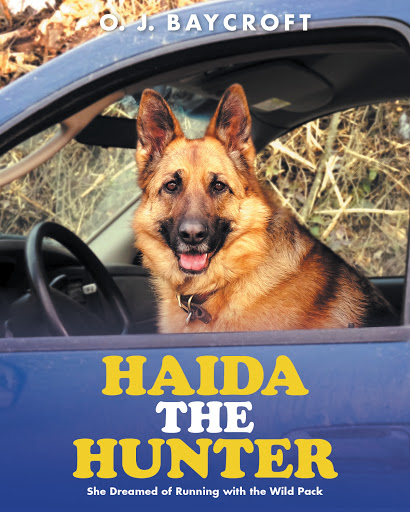 Haida The Hunter
She Dreamed of Running with the Wild Pack
by O. J. Baycroft

More than anything, Haida loved to be out hunting in the wilderness.

Haida is an active German Shepherd dog with an adventuresome attitude and a very active imagination. Like her family (people pack), she would rather live off the land the way her ancestors did and hunt for her own food, even if it is just for a short time. Like "Haida The Hunter", many of us dream of living as a part of nature rather than living on the outside looking in.

She dreams of the ancient bygone days when the only dogs that existed were the wild ones, her distant ancestors, the wolves. In a time before people there was endless land with no barriers. In the pristine mountains with cold clear streams and fresh air, she dreams of running in a pack of her closest comrades. Haida imagines the ultimate adventure, surviving and thriving in the harsh yet bountiful wilderness, with only her strength, wit and reliance on her loyal pack members.

When she saw her wolf cousins, the wild hunters, she dreamed of the distant past when the forests were pristine and endless, when belonging to the pack meant freedom, independence and adventure.

Owen Baycroft has always loved and cherished the outdoors and dogs. He chose a life many years ago that would take him away from the things that he enjoyed most. Only a few weeks per year were available to be in the surroundings that felt like home. The rest of the time was spent working in the corporate mechanized world of industrial automation. Building, maintaining and leading people in mills, mines and other large manufacturing plants was challenging and enjoyable, but it lacked the peace and quiet of nature.

It wasn’t always this way. Owen was born and grew up in Saskatchewan and lived in places such as Lizard Lake and Smoky Burn among others. He enjoyed wilderness living but was also well acquainted with farm animals that included cows, horses, pigs, chickens, and of course, dogs. There was even a pet beaver named Joe at one point. As a teenager, there were no part-time jobs that far out of town, so Owen was a cowboy/farmhand in summer and trapper in winter. There was always fishing in the spring and hunting in the fall. But you can’t stay at home forever, so Owen left the farm to find a life that would provide enough money and time to spend at least some time where the frogs croaked and the birds sang.

Owen has written some stories and poetry but mostly personalized for specific audiences and not widely published.