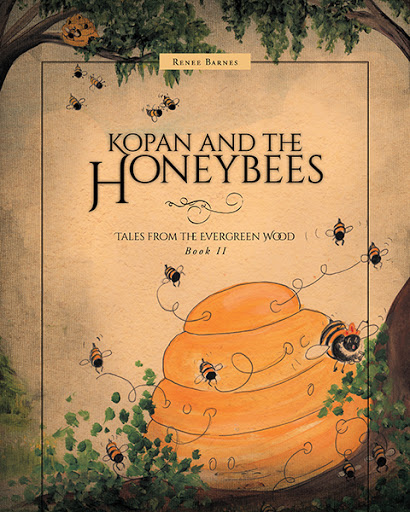 Kopan and the Honeybees
by Renee Barnes

In book II, “Kopan and the Honeybees,” Kopan, a lively little wood fairy is faced with an emergency situation. It appears that the beehive is about to dislodge it self from the great tree. Kopan realizes he must act quickly in order to prevent the hive from destruction which could cause the loss of the entire honey harvest. The problem is that the bees are so upset they won’t listen to him. This frantic situation calls for Kopan to keep a cool head, confront the menace and also find the bee queen. He will need her help in restoring some calm. Only Kopan with his amazing speed and quick wit could possibly challenge a problem of this magnitude. Who or what is causing the beehive to dislodge, and even more of a mystery, why?

These fully illustrated books present a charming and adventurous life in the forest of the Evergreen Wood. Through a variety of situations, mishaps and discoveries, these delightful creatures explore, challenge and conquer. As they face some dangerous and even threatening problems, these forest pals find the meaning of loyalty and bravery as they face numerable circumstances and build a bond of true friendship.

Once again, there is much going on within the Evergreen Wood

When Renee Barnes was a very small child, the globe was experiencing World War II. She and her younger brother were great pals and often found that they were their only playmates. She envied her brother's seemingly effortless physical abilities. While he was capable of climbing tall trees and walking fences. Renee tried doing these things but she usually fell. After some consideration she decided the ground was a safer place. She would sit and draw fairies and other imaginary friends who filled her mind. Though always an artist, it was not until 1994 when her youngest daughter became interested in ecology and the global environment that Renee created Katrinka Sweetblossom. This adorable little frog and her pals, Winslow the owl, Montebello the giant mushroom and Kopan the spirited wood fairy will keep you absorbed in their many experiences. All the forest creatures share in a variety of situations and challenges that keep you anticipating their next adventure. Renee's interior design business during the 1990's was exclusively the Family Entertainment Industry. This work included large murals and creating spaces where children could find learning with play in safe and enchanting environments. Since, her retirement from that industry, Renee has actively pursued her artistic talent. First, by bringing these captivating little characters for small children through wall art and now with her charming stories. Her core belief, that children should have their imagination encouraged through creative and safe environments is her life long passion.

Kopan and the Honeybees has been nominated by our staff as one of their favorite books.