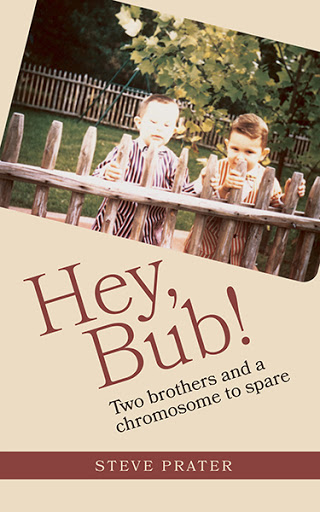 Hey, Bub!
Two brothers and a chromosome to spare by Steve Prater

“Hey, Bub!” was the familiar greeting Tom Prater used throughout his life. He was born with Down syndrome in 1949, and in spite of his disabilities, became a beloved and integral part of his family and community. While his speech was limited to phrases of just a few syllables, he found other ways to communicate and won the hearts of everyone who met him. Despite being beset by health concerns and institutional systems that were far from ideal, he found resilience and joy.

This is the story of two brothers, their childhood adventures, and their lifelong bond. In it, his brother Steve—bunk mate and partner in crime—reflects on their time together and the many lessons he’s still learning from his older brother.

When the world feels overwhelming or complex, we all seek answers from those who seem to have it all figured out. Tom leaves ample clues to happiness through his parables involving marshmallows, swing sets, bowling and dancing.

Steve Prater is a retired architect living in Ames, Iowa. He was raised in New York and then adopted by the Mid-west in 1970. He studied at Iowa State University and the University of Minnesota and practiced architecture and planning for fifteen years in Minnesota. In 1994, he moved with his wife and three children back to Iowa to work as a staff architect for the Facilities Planning and Management department at his alma mater. This position allowed Steve and his family to rejoin some of his extended family, including his brother, Tom, whom this book is about. In his spare time you can find Steve sailing, walking their dog, throwing pottery, and painting.