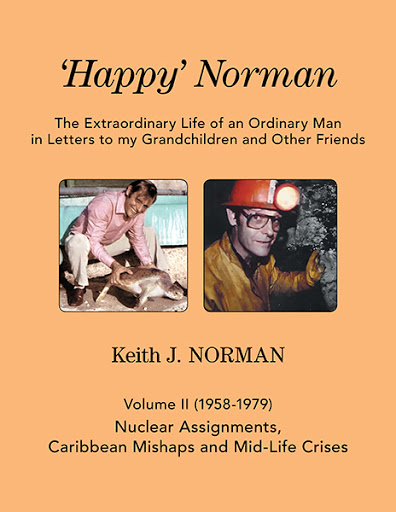 In Volume II the 30 year old Keith returns to the UK and begins a career as Commercial Director in the UK Atomic Energy Authority. When, after 13 years, the institutional demands get too restrictive, he quits and moves on to be Regional Director for the Caribbean and Central America in the Commonwealth Development and Finance Company. Operating from Kingston, Jamaica, Keith is responsible for the investments in a wide variety of industries: commercial properties, an airline, rice farming, pipeline manufacture, hotel management, a turtle farm and many others.

This experience gives Keith a taste of true entrepreneurship and he decides to set up on his own. From the first steps along the road from being his own boss he has never deviated from this path. Commercial rose growing in the Dominical Republic, refinancing of a hotel in Santo Domingo, real estate development in Cayman, raising finance and managing a uranium mining startup in Saskatchewan – are just a few of the businesses he is involved with.

One major commitment is to accept the appointment by the Grand Court of the Cayman Islands as Official Liquidator of a local Banking Group, comprising three banks and more than 100 operating subsidiary companies, ranging from a cattle breeding farm in Quebec to two inter-island trading vessels.

Keith meets each challenge with his usual passion, dedication, energy and responsibility. The intensity of his work demands, though, has its price and leads to the breakdown of two marriages. This volume ends with Keith starting his own gold mining company and meeting the love of his life.

Keith writes as honestly about his failures as he does about his successes. The analysis of the dictum of St Francis Xavier “Give me the child… and I will give you the man” continues through the search for the source of his decisions and whether those could be traced back to early experiences in his life.

Born to professional middle-class parents in the UK and forced to take on the mantle of adulthood at an early age during the turbulent years of World War II, Keith Norman developed an independent spirit and an inner drive that has served him well throughout his business career. His bold optimism and unrelenting energy has taken him around the world in a variety of occupations and in the company of colourful characters, many

of whom became friends, or partners.

Despite many ups and downs, and several fortunes gained and lost along the way, Keith’s confidence in his abilities never wavered, and he has always been ready to tackle the next opportunity.

Naturally prone to self-reflection, Keith began to analyse the inner reasons for the course his life had taken, both in business and in his personal decisions, and proceeded to take corrective action, reconciling with those he had inadvertently hurt along the way. In response to several requests from family members, friends, and acquaintances, Keith’s current challenge is to write a ‘no holds barred’ account of his extraordinary life, which is far from over . . . .