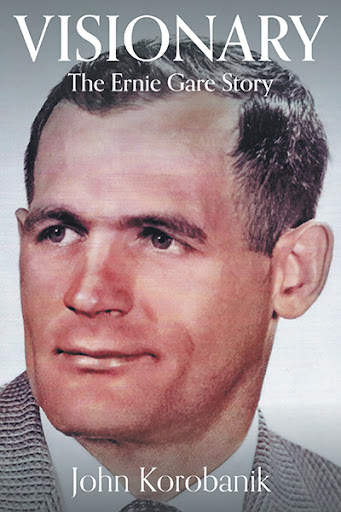 It’s not surprising if you’ve never heard of Ernie Gare; the man behind innovations that paved the way for many Canadians to pursue their athletic dreams without sacrificing education cared more about the future of the athletes and the sports than garnering fame for himself.

Without Gare and his drive to create the scholarship program, the world may not have seen Nancy Greene win an Olympic gold medal, or the Crazy Canucks take Canada to the top of the ski racing world. Without Gare’s collaboration with Bob Nicholson, the Program of Excellence might never have been created to help keep Canada one of the top hockey nations in the world.

This is the story of the man who changed the future of Canadian winter sports.

“Ernie Gare might just be the most influential Canadian sports figure you’ve never heard of. Who better to take you through Gare’s riveting journey than Korobanik, whose journalism roots lie in Nelson, B.C., and has written hockey at its highest level? A fascinating tale!”

—Mark Spector, author of The Battle of Alberta and Road to Gold, The Untold Story of Canada at the World Juniors

“Ernie Gare would not ask for nor expect the recognition he deserves for the vision, impact and legacy on family, community and benefit young Canadian athletes had then and today…without his vision and action it is doubtful I would have lived the best life ever. His story inspires you to think bigger and reminds us how Canada is blessed by people who live their passion like Ernie did.”