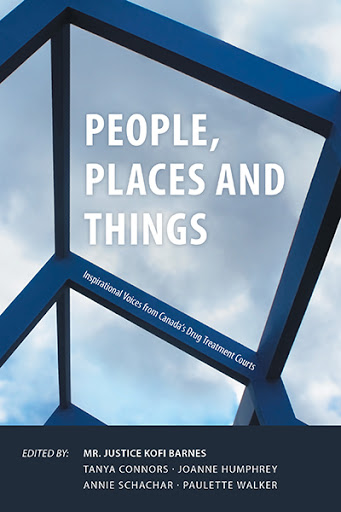 “In my eyes, Drug Treatment Court gives people like me a second chance to change their lives and to realize that we deserve a good life, no matter what we have done in the past. All I can really say is that if I didn’t have the privilege to be in drug treatment court, I would either still be incarcerated or would not be alive today.”

People, Places and Things is a collection of stories from men and women who have lived lives of drugs and crime. Each has made the courageous decision to overcome their addiction, and the even more courageous decision to share their journeys with you. As they strive for sobriety with the guidance of Canada’s drug treatment courts, they experience the extremes of addiction, the power of recovery, and the value of community.

The stories within are raw—the authors have bared their souls, which is a difficult and brave endeavour. Some of the stories in this book are tales of happy endings, while some represent very dark moments. Addiction, as any of life’s hardships, is a continuous journey; void of an end-state. These pages contain lessons about the power of resilience, the magic of hope, and the strength of believing in one’s ability to become the person one wants to be. The extremes you might experience as you embrace this collection of stories, poems, and artwork is representative of the extremes that those recovering from addiction endure, and of the extremes experienced by those that support, counsel, and represent them throughout their recovery.

Tanya Connors has a Masters of Social Work and over 20 years of experience working in the field of mental health and addictions. Currently the manager of the Forensic Early Intervention Service, a jail based mental health and triage program with the Centre for Addiction and Mental Health. Tanya has been with CAMH for over 10 years in a variety of roles, including the Court Liaison for the Toronto Drug Treatment Program. As an Adjunct Lecturer with the Factor-Inwentash Faculty of Social Work at the University of Toronto, Tanya also enjoys working with students and has also taught at the University of Windsor.

Joanne Humphrey is a Registered Psychotherapist, Art Therapist and has been an Addiction/Mental Health Counsellor for the London Drug Treatment Court at Addiction services of Thames Valley since 2010. Joanne has also been a trainer with the Organization of the American States and the Inter-American Drug Abuse Control Commission providing Drug Treatment Court Training to the judicial and addiction treatment sectors in Barbados and Jamaica. Her 20 year professional background includes working with youth in the criminal justice system and supporting women and children seeking safety from abuse at one of Canada’s largest secure shelters.

Annie Schachar is the director of Treatment Court Programs and the deputy director of Technical Assistance at the Center for Court Innovation in New York. Before joining the Center, Ms. Schachar practiced law as a defense attorney with Legal Aid Ontario in her home town of Toronto, where she represented clients in drug treatment court. Previously, she served as a prosecutor for the Ministry of the Attorney General in Ontario. Ms. Schachar is a graduate of the University of Toronto’s criminology department and Osgoode Hall Law School at York University.

Paulette went back to school and applied for a position as a Chef at the Russell Street cafeteria location, where she remained employed until July 2011. In 2005, Paulette was invited as a guest of the United Nations to share her story. She also was a recipient of the Courage to Come Back Award. In 2008 and 2013 Paulette received the CAMH Edward Tremaine Memorial Award of Excellence. She was hired as the very first part time Peer Support Worker in the Drug Treatment Addictions Program. While doing this meaningful work she continued working part-time for Aramark in the Russell Street location. Paulette also decided she needed to go back to school where she would be able to do her work more effectively. In 2012 Paulette Walker completed her Community Support Worker Program at George Brown College. Paulette continues working towards her educational goals. Paulette was hired as a full time Peer-Support Worker for the Toronto Drug Treatment Court Program in 2012. 2018 and 2019 Bell Let`s Talk Ambassador.

The Canadian Association of Drug Treatment Court Professionals (CADTCP) is proud to sponsor this publication.

CADTCP is the national representative of Drug Treatments Courts in Canada. CADTCP assists Canada’s Drug Treatment Courts in their efforts to achieve the holistic rehabilitation of drug addicted participants; reduce the infliction of individual and societal harm; enhance public safety; save tax payers money and save lives. Membership in CADTCP is open to anyone interested in how “Justice and Treatment” can work together to achieve these objectives.