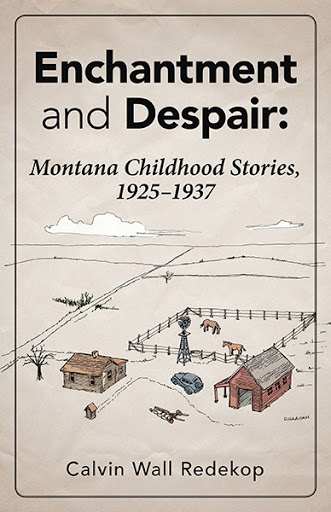 … enchanting big skies, an endless undulating prairie, the spine-tingling cry of midnight coyotes, the self-satisfaction of scratching sustenance from the earth …

This is the Montana of Calvin Wall Redekop’s childhood, a place at once what the neighbors labeled “the most awful forsaken place God had ever created” and a magical world for a wide-eyed boy. These background forces of hardship and wonder constituted Redekop’s earliest memories and in the retrospective vision of these remembrances he finds the subtle basis for his subsequent personal development and orientation. The mutual interdependence in the homesteading community encountered in Enchantment and Despair: A Montana Childhood 1925 – 1937 helped Redekop see the significance and power of cooperative human ventures, and recognize the importance of the environment in human survival: awareness the author has acted upon throughout his life.

Readers will be transported back in time by this vivid account of another age and, like its author, pass through despair to find themselves enchanted.

""Redekop enchants readers... These stories, set in the Dust Bowl and Depression can plant seeds for multigenerational connecting. Grandparents reading to their grandchildren, parents passing on the Anabaptist story to offspring and children's sermon volunteers courting eager listeners will want this book."

Calvin Wall Redekop was born in 1925 in Lustre, Montana, the closest settlement to his family’s farm on the Fort Peck Indian Reservation. There he experienced the drought and Depression that helped shape so much of his life.

Over a rewarding academic career including positions as a professor, dean, and vice president, Redekop has been on the faculties of Hesston College, the Earlham School of Religion, Goshen College, Tabor College, Conrad Grebel College, and the University of Waterloo. His major areas of academic scholarship have included faith and business, the sociology/theology/economics of Mennonites—with special focus on Canada, United States, Mexico and Paraguay—and the environment. He has spearheaded several energy and recycling ventures and published his book, “Creation and Environment (2000)” for this cause.

Upon retirement, he settled in Harrisonburg, Virginia, with his wife, Freda. He and Freda have lived within the Mennonite Church and led numerous tours focusing on Anabaptist/Mennonite history in Europe and in North and South America. Freda and Calvin have three sons.