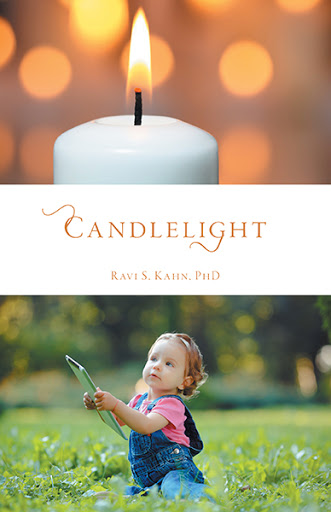 ‘Candlelight’ is a lovely collection of “snapshot memories” of an old man (the author’s) and a creative fantasy for an emerging generation who may deliver hopes for the future generations to come. It is a Fictional Memoir. It is written in clear and honest prose, varied themes and emotions are delivered well. The stories shed lights of a life with many struggles and accomplishments, love and love-lost, sufferings and finally joys of children and grandchildren filled with heartening sense of hope for our society.

“Thousands of candles can be lighted from a single candle, and the life of the candle will not be shortened. Happiness never decreases by being shared.”

“Ravi Kahn has worked hard to publish his writing, and I do hope that you will enjoy the product of his efforts and take heart from his creativity, imagination, and hopeful message. It was pleasure to take part in the publication of this innovative piece of writing. Sincerely,

“I knew that if God loved me, then I could do wonderful things, I could try great things, learn anything, achieve anything.”

Ravi S. Kahn is a retired corporate research scientist and a first-generation American with a Bengali mother tongue. Ravi’s Journey to the West started about fifty-five years ago as a foreign student in Canada. He climbed almost to the top, but a tremor within shook him down all the way down the mountain and into the ocean bay at its foot. After finding himself at sea, Ravi reenergized himself and straightened out his life a bit. Decided not to climb anymore, got a sailboat journey instead. Then a big political storm with high waves swept him along with his wife and two very young children away to a new shore, America. That was about forty-three years ago. He struggled a bit to establish himself in the new environment and finally saw some lights. In his journey, Ravi risked his heart for his children. When they grew up and no longer needed his support they became independent to make their destiny. Ravi, a man of deep Muslim faith, watched his transplanted adult offspring pull away and/or reject their roots. Ravi was anguished and hurt. However, he was also jubilant with his grandchildren. Ravi loves his grandchildren, and they love him. Ravi’s journey within rediscovers rekindles his “Candlelight” and set a new course for a destination that would ultimately matter.