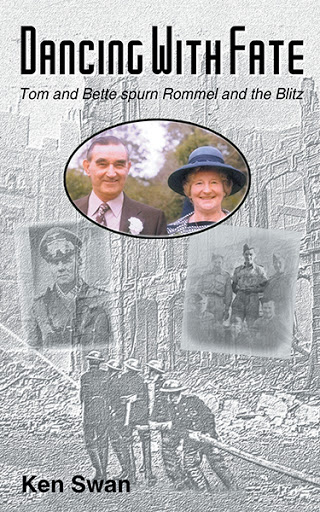 Tom Gale, an ordinary soldier endures one of the hardest hit battles in history, only to fall to capture, twice. A fleeting moment with celebrity and back to fighting. His humour and nature helped him through it all.

Just as both were catching their breath, Fate conspires to bring these two spirits together.

Ken Swan was raised in South Africa and Northern Rhodesia, where he became a Police Officer. The political winds of change encouraged him to move and thrust him into the night life of London. He wanted to do something different than others. He won an audition on TV’s “Opportunity Knocks” and was due to appear in January of 1966, but he decided, instead, to live a life of adventure and travel.

Since arriving in Canada in 1965, Ken made a living in the Employee Benefits business, but his life was wrapped around Amateur Theatre, obtaining his flying licence, making TV commercials, and meeting Hollywood greats, and not so greats, as a movie extra. Ken then took up watercolour painting and, since retiring from the insurance world, he is now a travel agent and a new author.

Ken is happily married to Helene. They have no children. They live in White Rock in British Columbia.