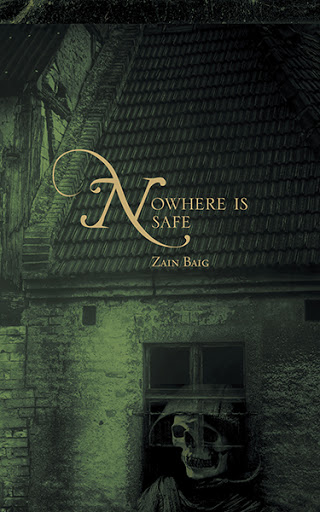 Nowhere is Safe
by Zain Baig

There’s a cold and calculated murderer at large in Boulder, Colorado. Having killed ten people already, the police are no closer in discovering who is behind these grizzly murders, only that the body count is adding up at an alarming rate. With a plea to the public to remain in their homes they continue their search for the killer, whose motives for murder are baffling, yet equally disturbing.

When Adem sets off to meet up with his cousin over the Christmas holidays, he hears the warning over the radio and then fear sets in. Given the killer’s apparent location, he is aware of the peril that exists. However, a dramatic twist of fate takes him wayward on his journey and, after his car skids off the road, he finds himself on foot in the middle of nowhere, fighting for his own survival amidst a threatening blizzard.

Just as all hope seems lost, he stumbles across an old mansion and pleads with the servant to help him in his time of need. But, the mansion holds a dark and sinister secret, and the owner, charming yet mysterious. As Adem ensures his safety from the hellish weather and the anonymity of the killer at large, will he discover where the true danger lies? Are the ghost sightings threatening or a warning for him to leave? The forbidden hallway, strange sightings throughout the building and an unknown entity who enters the mansion late at night, create a chilling atmosphere to this spine-tingling tale.

Some of the oldest houses have the darkest secrets

Zain Baig is a young Author from Canada. Nowhere is Safe is his first novel, a tale of horror about a young man called Adem, who stumbles across a creepy mansion. His creative yet unnerving imagination ensures an array of twists and turns throughout the story, keeping the reader engulfed in murder and mystery until the final page.

As a child, Zain enjoyed writing stories, and it was only a year ago that he embarked on writing his first novel for publication, and with his love of horror, he decided upon writing a story which he would now like to share with the world.

His favourite genre is horror, and in his spare time he enjoys reading and writing; however, he also thrives on other pastimes, and is fond of playing soccer and entertains himself on video games. When asked about any challenges he faced while writing this book, he claimed that maintaining a consistent plot throughout the story was his greatest hurdle, however, one that he was able to make work in the end. He did very little research, following only his imagination to bring the characters and story to life.