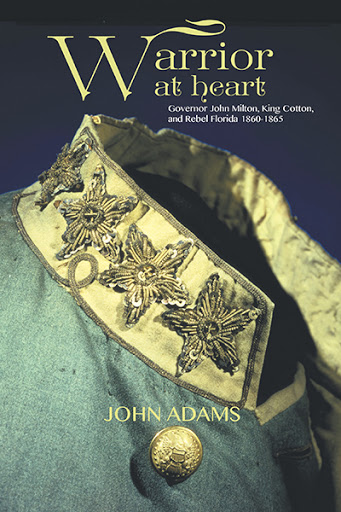 John Milton—a true son of the South— endeavored to find ways in which to keep Florida relevant to the Confederate cause. Under Milton, Florida was a key contributor of supplies for the Confederate Army. supplies. By pledging men, beef, and salt among other supplies, Milton gave credence to Florida’s war effort.

However, poor strategizing, blockades, and lack of military might led to several failed attempts to overcome the Union armies infiltrating the Florida coast. Left to defend themselves from the enemy with little help from their Confederate compatriots, Floridians grew increasingly disenchanted with their government’s dismissive attitude. Over the course of the war, they were caught between survival and secession. With little resources remaining, survival was the only way for the state to maintain itself.

Left disillusioned, the embattled Milton took matters into his own hands, refusing to submit to the impending surrender secession and the ignominy of defeat.

Warrior at Heart is an in-depth study of Florida’s Southern history during the Civil War. Historian John Adams gives detailed analyses of not only the economic dynamics reasons for the South to wage war, but also the events that shaped John Milton’s role in the war effort.

John Adams is an historian and the author of several books on a cross-section of topics ranging from the US military to the South.

As past president of Enterprise Florida, a joint venture to develop the state’s economy through job expansion, Adams had ample opportunity to survey the key locations that comprised the front lines of Civil War Florida. Additionally, he had access to primary documents and sources previously not accumulated or researched for this broad, dynamic topic, which have helped to shed light on, and provide an intimate view of, Governor John Milton and his times.