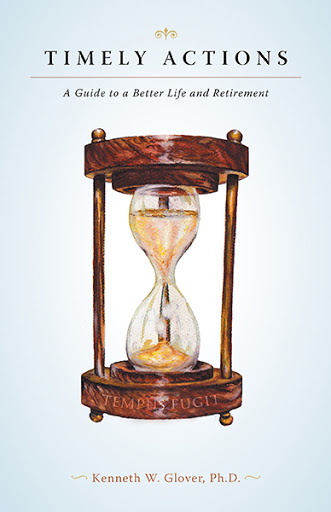 Timely Actions
A Guide to a Better Life and Retirement
by Kenneth W. Glover

Kenneth Glover has been giving advice to his three children and four granddaughters for years. Now those outside of his family will have the opportunity to benefit from his wealth of experience colored by his real-life anecdotes in this book. From health and aging to investment and retirement, the recommendations of the author have the potential to better the reader's quality of life every day.

“All the advice I wanted to give my kids but never got around to it. Now I can”

“The witty drawings made this a quick easy-to-read book.”

“The chapter on investing is good, sound advice for all ages.”

Kenneth Glover was born in a small village called Ailsworth in Cambridgeshire, about 100 miles north of London. In 1937 he earned a scholarship (the first in his village) to go to a secondary school in Peterborough, five miles away. In 1944, he also earned a scholarship to attend Imperial College, London University for a four year Chemical Engineering degree. This was during the last of six years of World War II and London was receiving daily V-1s and V-2s.

When the war ended in 1945, Ken’s draft deferment also ended and he was called into the Royal Army Ordnance Corps for two years. He became a second lieutenant and spent almost a year in the garrison of Gibraltar. When he was demobilized he was awarded a FETA which is the British equivalent of the GI Bill. It gave him four years of funds for college, and he only needed two years to complete his Bachelor of Science, so he stayed on at Imperial College and did research in the Low Temperature Lab (now called Cryogenics).

In 1954 Ken got his Ph.D. in Chemical Engineering and emigrated to Montreal, Canada with his wife, Doris and their 12-week-old son, Nigel. After four years there working for L’Air Liquide, a French industrial gas separation company, and the birth of their second son, Nicholas, they moved to their first house in Rowayton, Connecticut. Their daughter Melanie, the first American in the family, was born there. Ken continued his job with L’Air Liquide at the company’s New York office in the Chrysler Building.

The family later lived in Atlanta, Georgia, Jacksonville, Florida, and Houston, Texas where Ken has been retired for 23 years. They are all now naturalized citizens of the USA. Throughout his career Ken worked for five companies, serving as president of three of them.

Ken played golf for 70 years (ages 14-84) and was an avid boomerang thrower and member of the US Boomerang Association for many years. He also painted (oils) in the sixties and again in 2000-2008. You can follow his blog at www.texaslimey.com.