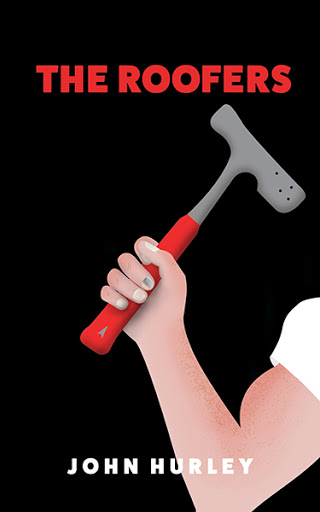 The Roofers
by John Hurley

Life is anything but boring for a roofing crew of good old Northern Ontario boys who work hard and party harder. This unforgettable cast of characters includes Dillon, Bossman, Brudder, Johnny the Ripper, Glenny, and What – a man of few words who seems to have trouble keeping his pants on, plus the beautiful bikinied “Brew Crew Girls”, who sit in the back of a pick-up truck turned swimming pool and give out business cards to potential customers. Although their days are filled with hard work and dealing with the harassing tactics of their competitors, the boys’ nights and weekends are filled with drinking, fighting, backyard barbecues, and good-natured practical jokes. That is, until they decide to head down to the southern states to help repair homes damaged by a hurricane. There, the boys risk everything when they come up against a gang of Mexican roofers who are willing to do anything to eliminate the competition. The Roofers follows the ups and downs of a family roofing business passed from brothers to sons. While a work of fiction, many of the roofers’ antics and the situations they face have been shaped by the author’s experiences as a real-life roofer. Both eye-opening and entertaining, this book celebrates the everyday blue-collar heroes who get things done.

John Hurley has the perfect qualifications to write The Roofers. He works alongside his brothers, sons, and nephews in a family-owned roofing business in Northern Ontario. The people he works with are his inspiration for writing this book. He says, “I have developed a great respect for these guys. They work at heights in harsh elements and do a job that most people don’t want to do for a living. It was in me for a long time to tell their story.”

John lives with his wife, Samarita, and their two daughters, Kiara and Mallory. Although he has always had a passion for writing, The Roofers is Hurley’s first book. However, he is already at work on his second one, as well as a children’s book based on stories he told his daughters when they were little.