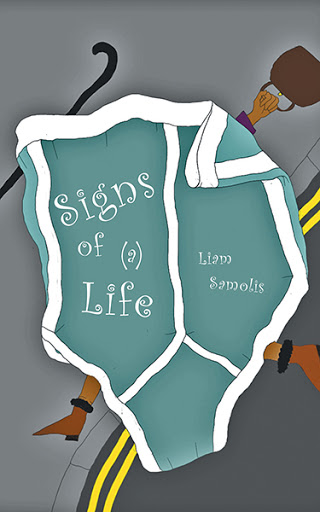 Signs of (a) Life
by Liam Samolis

Much like his beloved – and somewhat decrepit – cars, Liam Samolis (NOT his real name; that was changed in order to protect his wife and children from ridicule on the off chance some of their friends will read his work) is hurtling towards 50 with the brakes failing. The painful loss of his father leads Liam to look back at his life as he contemplates the legacy he is leaving his own children; resulting in a hilarious, often self-deprecating, and ALWAYS brutally, side-splittingly, honest glimpse at the path that has led him to become the man that he is. With stories about growing up as a painfully shy child in England, going to an all-boys’ school, and what can only be described as the most uproariously hysterical bar scene EVER written, Liam also recounts his days as a police officer, the births of his children, and saying goodbye to his father. What began as a legacy to his children will send readers into peals of raucous laughter, likely leading them to tears and other unexpected bodily functions. If you read one book this year, Signs of (a) Life should be it – nowhere else will you be so moved by a man simply living.

"...the author clearly has a wonderful sense of humour and self-awareness (and very little inclination to stifle any of it)... as well as being a wonderfully graphic storyteller..."

LIAM SAMOLIS grew up in England where he went into the police service at an early age, after barely surviving the tedium of an all-boys’ school. Moving with his young family to British Columbia, Canada, in 2002 and staying there ever since (surprisingly never getting deported), Liam is edging the half century mark; determined that impending prostate exams and incipient acrophobia won’t slow him down, Liam excels in trying to be the best father and husband he can be, as well as a poor fisherman. A big Teddy Bear at heart, the author has been chased by cows, buxom women, and his own pending mortality, and writes with these and many other life experiences moving his pen.

Signs of (a) Life has been nominated by our staff as one of their favorite books.