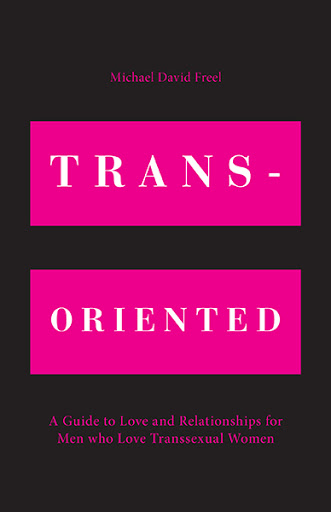 With everything a TGentleman will need to know about dating, friendship, romance, love, and sex with a TGirl, this comprehensive look at a seldom-examined world is jam-packed with information and practical advice.

And it won’t shrink from hitting readers upside the head with a ‘clue by 4’, either. The stereotype-shattering Trans-Oriented will be a revelation and an education, to those who share the orientation and to anyone interested in LGBT issues, human sexuality, or romantic relationships in general.

Trans-Oriented, for all its hilarity, carries a serious and urgent message in defense of transgender women. Women who, Freel lovingly stresses, are not to be objectified, and who deserve the love and respect that must be the bedrock upon which any human relationship is built.

When author Michael David Freel came out to himself and the rest of the world as Trans-Oriented, there were no resources to guide him. He made a lot of mistakes and had a very hard time, so he created the resource he wishes he’d had when he first came out. Born in Florida but now a proud and active member of Montreal’s LGBT community, he’s been a waiter, a ghost-buster, an ordained priest, a tarot-reader, a salesman, a factory worker... and generally occupied more professional positions than you can think of—and some you can’t. It’s been a wild adventure of a life, and trans-orientation has always been a part of it, though many early years were spent exploring his sexuality in his journey to learn what was different about him. Once he finally understood, this guide to love and life for true gentlemen who love transsexual women clawed its way out of him.