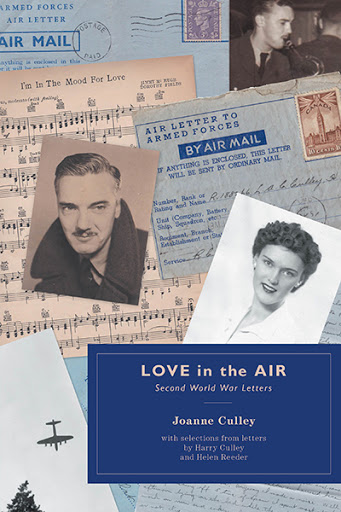 Love in the Air tells the story of a love that blossoms when an ambitious farm girl from Saskatchewan and a charming musician from Ontario lock eyes one night during a wartime social. But duty soon calls, and with a ring sealing the promise of a future together, the two embark upon different paths an ocean apart.

Separated for two and a half years during the Second World War, Helen Reeder, age 24 and Harry Culley, age 29 write over 600 letters, detailing their experiences and emotions, while deepening their mutual devotion. Helen writes about her work at the Department of Munitions and Supply and later the Toronto Transportation Commission, while Harry tells about bringing music to Allied troops and civilians as part of the Royal Canadian Air Force dance and concert bands. After their deaths, their letters are discovered, safely stowed away in an Eaton’s box. By blending excerpts from the letters with a narrative inspired by the correspondences and historical background, daughter Joanne Culley brings to life this unique story of enduring love amidst global turmoil.

"The Second World War was a hate-filled time for many people but not for two Canadians whose love affair triumphed over anger, violence, tragedy and separation. Love in the Air is a charming book that gives insight into life behind the lines in both Canada and England."

“Love in the Air is a gift from the past, providing us with a glimpse into what was going on on both sides of the Atlantic, through the eloquent letters of Harry Culley, a musician entertaining troops and celebrities while dodging bombs, and those from his fiancée Helen Reeder, at home working on shifts, keeping him up to date on the latest movies and songs, all the while never knowing if they would see each other again.”

Joanne Culley received her MA in English Literature from the University of Toronto. She is an award-winning writer and documentary producer whose work has appeared in the Globe and Mail, Peterborough Examiner, Local Parent, Kawartha Cottage, Kawartha Homes, Our Canada, and on CBC, Bravo Network, Rogers Television, TVOntario, and more. She grew up in Toronto and now lives in Peterborough, Ontario.