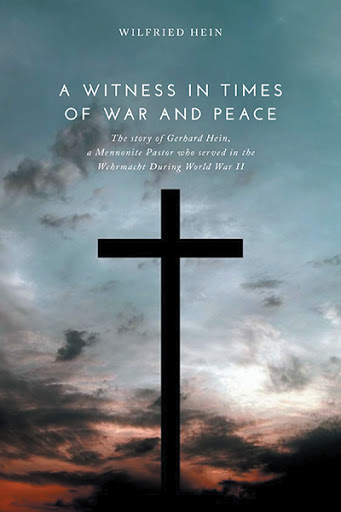 A Witness in Times of War and Peace
The story of Gerhard Hein, a Mennonite Pastor who served in the Wehrmacht During World War II
by Wilfried Hein

A Witness in Times of War and Peace is a searing memoir that describes the struggles a Mennonite pastor experiences during the Second World War. Gerhard Hein is a practicing Mennonite when he is called up for duty, and he must reconcile his pacifist beliefs with the obligation to serve in Germany’s Wehrmacht. He displays courage in a terrifying and uncertain time by voicing his concerns about the National Socialistic ideology in both words and deeds, standing up for his beliefs by pointing to the One who can bring real peace. His story shows that in the darkness of war, rays of genuine love, care, and compassion can shine through.

Gerhard Hein was born in 1905 into a German-speaking family in a Mennonite settlement near Ufa in the Ural Mountains of Russia. He later immigrated to Germany, where he studied theology, graduating as a minister in 1931. Hein was ordained as a pastor in 1935, serving several Mennonite communities in southwest Germany and Berlin. From 1940 – 1945 he served in the Wehrmacht as an interpreter, cracking secret Russian codes. Gerhard Hein was also the editor of several Mennonite journals, and co-editor and eventual sole editor of the German edition of the Mennonite Encyclopedia. Many of his German poems have been published in “Vertrauen, Freuen, Danken.”

Gerhard and his wife Lydia had two sons. His youngest son Wilfried translated his interesting war-time story and biography, because he believes that we can and should learn from historic events.