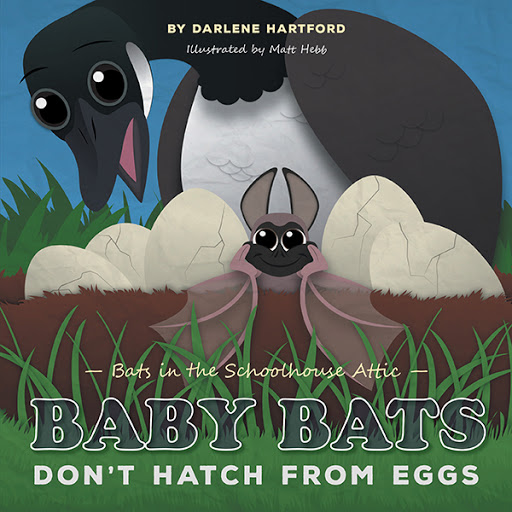 Sebastian was a newborn bat pup living in the attic of the old yellow schoolhouse. More than anything, Sebastian wanted to fly like the bigger bats, but he was too young. Typically, female bats roosting in the schoolhouse kept their pups safely inside when flying off to feed at night. But, one night, knowing how anxious Sebastian was to fly, Mother Bat decided to take Sebastian with her. Mother Bat tucked Sebastian safely under wing and flew out of the attic roost. That was not a good idea! It was the start of a scary adventure , where, before too long, Sebastian was alone and frightened.

Sebastian heard strange cracking noises all around and saw two black eyes glaring at him! What were those weird sounds and who was glaring at him? Where was he? But more important, where was Mother Bat?

In 1908 a school was constructed at the water’s edge of Lake Okanagan in Peachland, British Columbia. It was built as a community school for all ages, and over time, changed to a High School, Elementary School, and eventually a Primary School. In 2002 it was closed. Windows and doors were boarded shut and it sat dormant, or so it seemed. Upon the decision to renovate the historic building a maternity colony of approximately 2,000 bats was discovered inhabiting the attic. In 2013 the schoolhouse reopened as the Peachland Historic Primary School, a community building where humans and bats co-habituate. Visit the historic site to learn more about bat species and to view Peachland Bats in the schoolhouse attic. The Peachland Chamber of Commerce became host to Peachland Bats Educational and Conservation Program. This book was created to assist in their initiative. www.peachlandbats.ca

Darlene Hartford dedicated the series, Bats in the Schoolhouse Attic, to her seven grandchildren.