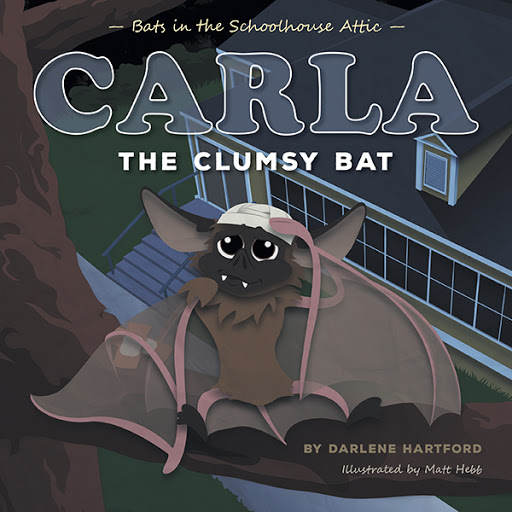 Carla is a beautiful Yuma Bat who lives in the attic of a one hundred year-old schoolhouse. Carla uses echolocation to navigate safely and hunt for food. She is a graceful and skilled Yuma. Then, one mysterious night, Carla becomes clumsy! What happened to Carla’s radar system? And can it be fixed? Follow Carla through a series of mishaps that unfortunately lead to her capture. Will Carla escape? And will she, once again, be the beautiful, graceful Yuma Bat she was?

In 1908 a school was constructed at the water’s edge of Lake Okanagan in Peachland, British Columbia. It was built as a community school for all ages, and over time, changed to a High School, Elementary School, and eventually a Primary School. In 2002 it was closed. Windows and doors were boarded shut and it sat dormant, or so it seemed. Upon the decision to renovate the historic building a maternity colony of approximately 2000 bats was discovered inhabiting the attic. In 2013 the schoolhouse reopened as the Peachland Historic Primary School, a community building where people co-habituate with bats. Visit the historic site to learn more about bat species and to view Peachland Bats in the schoolhouse attic. The Peachland Chamber of Commerce became host to Peachland Bats Educational and Conservation Program. This book was created to assist in their initiative. www.peachlandbats.ca

The lakefront community of Peachland has 5,000 residents, as well as a colony of 2,000 bats, that live in a historic schoolhouse. The school was closed and boarded shut for ten years. When the decision was made to preserve the building, the bat colony was also saved. A community educational program was established to promote public awareness of the value of bats, and to discredit myths surrounding the protected species. Darlene Hartford is the Peachland Chamber of Commerce Director of Peachland Bats Educational and Conservation Program.

The colony of winged mammals inspired Darlene Hartford to write a series of whimsical stories with endearing bat characters. The Peachland Historic Primary School is home to a maternity colony, consisting of mainly female bats, roosting together, producing offspring. The stories are adventures of mother bats with their pups or juveniles, and provide a harmonious balance between the imaginative and the educational. Each book provides Bat Facts in reference to the storyline.

Darlene Hartford dedicated the series, Bats in the Schoolhouse Attic, to her grandchildren.