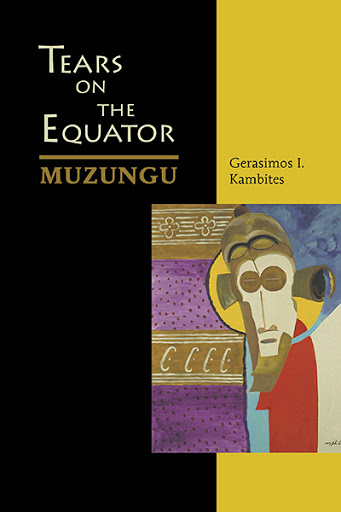 Tears On The Equator
Muzungu
by Gerasimos I. Kambites

In the beginning, in 1973, when a young couple met at a seminary in the city of Boston, during a time of great racial tension over an issue called bussing, they dared to share a dream and the dream was about faith, progress, unity, love and sustainable development in Africa. She trained in education, her Canadian husband schooled in medicine. They would return to the Ugandan paradise island of her youth in Lake Victoria only to discover that beauty hid the beast; that an interracial couple, white and black and their Ancient Orthodox faith would cause a spark which turned verdant fields into flames of conflict. Truths would be told and taboos would be broken. Courage would be unveiled and passions uncovered. This story is about the glue that maintained the vision until time, politics and war wore it away. It is also about survival and rebirth and the ultimate seeds which gave birth to a new crop of hopes.

“What are you looking at old man?” the young doctor queried. The elder was looking into a rotten log. “I am seeing the face of God,” he smiled standing up, allowing the doctor to see the sun kissed orchid.”

“The face of God,” he said, and so it was, for their five years on Bukasa island uncovered the weaknesses and strengths of this couple and the community around them. That they would fail was inevitable, but that they would survive in a real and mystical way was the hidden treasure.

Gerry: Thank you so much for your honesty. I couldn't stop reading and I am sadly now done. I have learned a great deal from the doctor, the husband, the parent, the priest and finally the journalist who tells this story. It really is a story that demands to be told by you. And this story could not have made a better choice. - Allen Smith

I was moved by the story throughout. As I have mentioned, tissues were required as well as taking deep breaths occasionally for the scary bits. As a westerner I would find it very difficult to cope with the cultural divide, the many beliefs and superstitions, not to mention the prejudices regarding race and colour. The lack of sanctity for human life also astounds me, and this we read about daily as occurring in many places in the world. And yet, so many people like you and Sarah work so hard to bring about change in the face of insurmountable odds and even abuse. - Victor Bush, Author/Teacher

Tears on the Equator is a story which requires telling...for anyone interested in Africa...this is a seamless book for them to ingest. - David Hutton, Author

Gerasimos Kambites was born in Montreal in 1947, a third generation Greek Canadian, raised in his father’s corner store. Over 15 years he read every comic book and most magazines that came through the business. He went to Sir George Williams University in Montreal from 1965-69, then worked as a Parliamentary journalist for United Press International from 1969-73. He wrote two stories for National Geographic and produced an audio documentary on Mount Athos: In the Fullness of Truth for CBC. He was a videographer for the Transworld Snowmobile Expedition in 1973. That experience led him to Holy Cross Seminary in Brookline, Massachusetts and Sinai’s St. Katherine’s Monastery where he spent 6 months. Earning a Master’s in Divinity, he went to medical school at McMaster University in Hamilton, Ontario before heading to Uganda. He was ordained to the priesthood by the late Metropolitan Vitaly, founded Annunciation Orthodox Church on Bukasa island and St. Xenia’s of St. Petersburg in Ottawa, eventually leaving the priesthood. He then studied psychiatry and now works as an Orthodox psychotherapist. He and his wife, Ann, raise sheep and horses on a farm on the Rideau River, and continue to support Father Christopher Walusimbi on Bukasa. In 2008, Dr. Kambites took part in National Geographic’s Genographic DNA tracking program. The greatest irony for him is that his genetic map marks him as having originated in East Africa, in the Northern part of Lake Victoria. By moving to Uganda, in a true sense, he was just coming home.