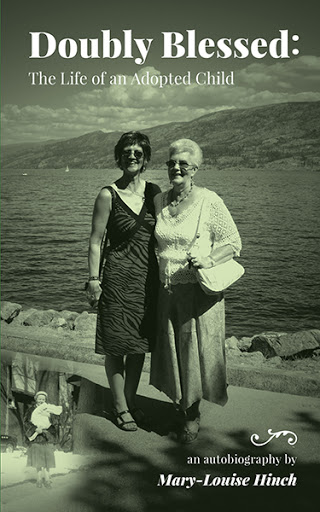 Doubly Blessed: The Life of an Adopted Child
by Mary-Louise Hinch

There was a time when having a child out of wedlock was socially unacceptable. Many young mothers had to go away during their pregnancy to avoid moral condemnation. My birth mother was one of these. For every one of these young women, however, there was another woman desperate to start a family with her husband, yet unable to conceive. My adopted mother was one of these. I was the very lucky baby who was given the opportunity to know and love both of these courageous mothers and their spouses.

This book is an attempt to describe just how fortunate I am to have had two sets of parents in my life and a total of three siblings. It is one thing to grow up in a family and be nurtured and loved by them, but to have had two such experiences is beyond wonderful. It is nothing short of a miracle.

I know there are adoptees like myself who have found a birth parent and experienced quite a different outcome than I have. To these people, I offer my hope that your adoptive parents have given you the love and the support that you needed in order to become all that you could be. The plain and simple fact is that some people should never have children. To those adoptees contemplating searching for their birth mother or father, I would encourage you to open that potentially fearful door; just be prepared emotionally for what may come of the attempt to find your roots. You might be rejected because it would create too many problems at this point in your birth parent’s life. On the other hand, you might be received with open arms and love what you find, as I did. You might also be welcomed and not like what you find. At least, however, you would know where you began. Whether or not our birth parents are people with whom we can connect emotionally, they still gave us life.

I have had relatives and good friends ask why I am writing this book. I see it as a way of honouring both sets of parents. My adopted parents died before I felt the need to find my birth mother. I pray that they are aware of how successful my search was, and of the deep bond that has developed between my birth mother and myself. I would like to think that they would not be threatened by this relationship. Though I genuinely love my birth mother, it is a different kind of relationship that we have, because she was unable to raise me. This memoir is meant to honour my adoptive parents while, at the same time, confirm my gratitude to and love for my birth mother.

Mary-Louise (Mel) Hinch was born in 1956 in Toronto, Ontario. Her adoptive parents, both high school teachers, raised her and her adopted brother in Timmins. Mel graduated from the University of Western Ontario with an Honors BA in English and Music, and proceeded to teach high school in Ajax and Barrie, Ontario, as well as in Brussels, Belgium. In addition to her career in formal education, Mel has worked simultaneously in other areas as well: as a professional singer, a private voice teacher, a church choir director, a choral workshop director, a music director of amateur musical theatre productions, a children’s musical theatre camp director, a performing arts groups’ tour director, and a newsletter editor. She has just retired from teaching in Barrie, where she lives with husband, soul mate, and number one supporter, Michael, and their recently rescued feline, Charlie.