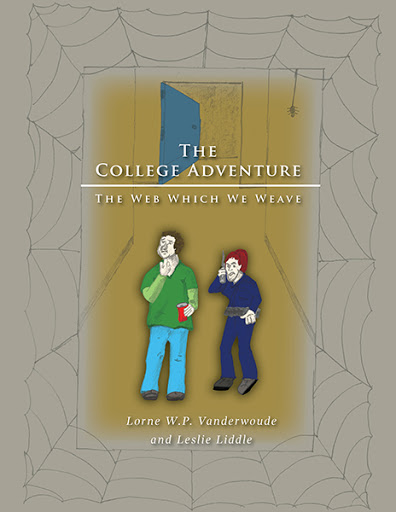 The College Adventure
The Web Which We Weave
by Lorne W.P. Vanderwoude and Leslie Liddle

It is the web which we weave when we first begin to deceive. Everybody has cobwebs in dark closets in their lives. This sequel to “The RSA adventure – The untold story now revealed” now goes back in time to the events which David wrote about in his journal when he became a resident in the same nursing home where he had worked for the past thirty-five years. This time the events were written in time from the point of view of Janet and Steve who were security guards at the town’s University. For every story there is always another side of that story. These events were like an exciting roller coaster ride loaded with tons of surprises and of course this ride ends in a way which no one could ever predict. I dare you to come along for the ride of your life. Revisit the events of the first book and experience them in a different way. Yes, the web which we weave when we first start to deceive.

Lorne W.P Vanderwoude lives with his wife in Camrose, Alberta. Leslie Liddle lives with her husband in Bawlf, Alberta. It was while the two of them were at work when they discovered how much they loved to write. Leslie was one of the editors of the “The RSA Adventure – The untold story now revealed.” The two of them got together to help create this newest book, now written as a sequel to this first novel.

There were a few problems that came up when the first book was released. There were a few errors which had slipped through the editors as well as the author. In order to correct this, more editors were hired to ensure that the novel would be as perfect as possible. The second problem (which was revealed to us by our readers), was that the flashbacks were sometimes confusing. These were scaled back and used very seldom to help clear up the confusion.

Lorne and Leslie really enjoy creating stories. This newest book is yet another dream of Lorne’s. He had always wanted to co-author a book with another author who also shares his love for telling stories. Lorne always had believed the saying that, “Two heads are better than one.” Now this is another dream that Lorne is now fulfilling. His dream of writing a book with a second author.