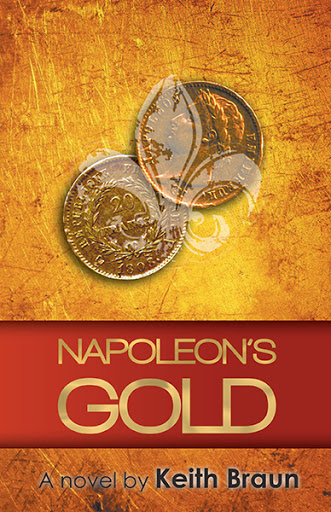 Napoleon’s Gold is a historical fiction, set during the the Peace of Amiens, which marked the end of the French Revolutionary War and the beginning of the Napoleonic War. Smugglers and spies mingle with Admiralty Lords and the Heir to the Throne, while a British Navy captain is transformed into a thief extrordinaire. Phillip Hollis, the paradoxical captain who detests violence is thrust into broadsides on the high seas, rescuing hostages, and stealing millions in French Gold. All comes at a price to the peer who has no interest in women but falls in love with a young lady who detests the idea of men or marriage. At time humorous, at times thrilling, the book asks the question of why inexplicable events occured during the fragile peace and provides fictional reasons that might have prompted them.

My first travels into the world of sailing ships, smugglers, and pirates occured hiding under my bedcovers with a flashlight reading "The Pirates of Penzance" and "Kidnapped". As an adult I was fortunate to be a passenger on a sailing ship caught in a storm on the Atlantic. It was marvelous! With my wife Carol, I have dived on wrecks in thePacific and Carribean, I have flown a plane into the sub-artic, and unfortunately crashed one on a gun range.

I am happily married to my love of over forty years, with three kids and nine fabulous grandchildren. We are fortunate to be involved in all their lives, as well as the life of our church family, which we cherish.

My love of history and my curiosity coincided to bring me to ask the question of why Napoleon made some of the strategic errors he did during the brief peace of 1802. This book is the result of that question.