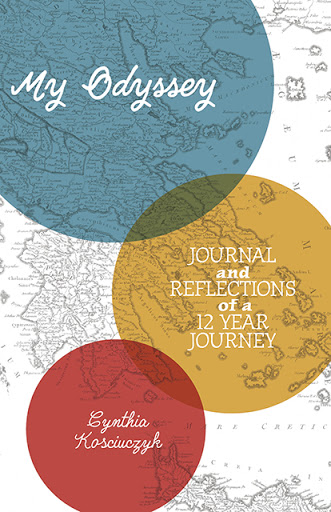 Traversing the world, Cynthia’s travels have taken her to many places she never expected. She found her way back to the USA in 2000 after a 12 year journey. Her heart never forgets her past journeys and would love to share them with you. Elateh!

Cynthia is an American who was married to a Greek. Her poems burst with visceral memories of her life in Greece as an interloper, enthralled and captivated by the culture surrounding her. Seeing her marriage disintegrating around her, Cynthia clung to the local sights, sounds, smells, and the cooking skills she learned so well while living there. She adopted Greece, even if Greece didn’t adopt Cynthia. Divorced now and living in the island community of Coronado, California, Cynthia’s Mediterranean memories can carry us all across the globe to a magical and an ideal version of Greece.

Equal parts sensual road map and wistful travelogue, this intimate love letter to Greece will have you ready to grab a passport.

Having run around the world to Greece following a BS in Biochemistry and a 10-year marriage as Mrs. Skarlatos, Cynthia’s travels have taken her to many places she never expected. Returning to the US in 2000 after her 12-year journey, she remarried to become Mrs. Gaddes. She quelled her longings to be somewhere exotic by immersing herself in Greek restaurants and Persian rugs.

Following her 2010 divorce, she received an MBA and found her way back into research. Though her mind is totally engaged in her present activities, her heart has never forgotten her past journey.