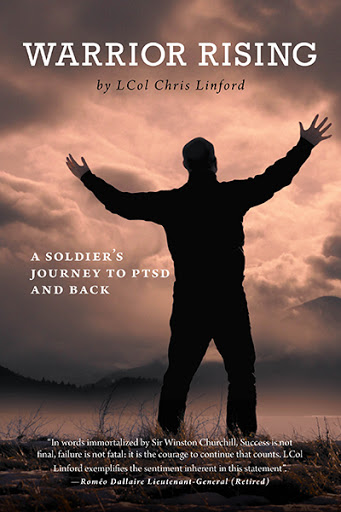 Warrior Rising is a very personal and inspirational story of LCol Chris Linford’s road to a diagnosis of PTSD after three operational deployments to the Gulf War, Rwanda, and Kandahar, Afghanistan. He recounts his associated war stories, but it was the traumas that impacted him so dramatically leading him to what he describes as the very edge of his personal and professional competence. Finally years later and after months of effective treatment he discovered new ways to improve his health further and has since become involved in peer counselling and ongoing support to veterans who need assistance. LCol Linford remains disappointed that PTSD is still being kept in the shadows worsening the stigma surrounding it; it’s time to talk about the eight hundred pound elephant in the room! LCol Linford through this book addresses that elephant.

A portion of the proceeds of sales from this book will be donated to the Veterans Transition Program.

“In words immortalized by Sir Winston Churchill, Success is not final, failure is not fatal: it is the courage to continue that counts. LCol Linford exemplifies the sentiment inherent in this statement”.

"LCol Linford tells his own story, describing not only how PTSD took over his life but also what he eventually did to beat it". Senator Romeo Dallaire 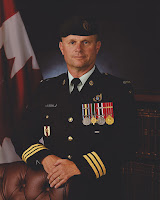 LCol Linford served 25 years in the Canadian Armed Forces and was medically released in 2014. On his first missions to the Gulf War and Rwanda he served as a Nursing Officer witnessing first hand the terrible trauma's endured in modern war zones. As a Health Care Administrator in Afghanistan at the NATO Role 3 Combat Surgical Hospital in Kandahar from 2009- 2010, he witnessed the aftermath of deadly improvised explosive devices (IED) that either killed or severely maimed friendly troops. This experience led him one more time to the depths of severe PTSD. His year and a half long treatment post deployment was one of the toughest experiences of his life, but he learned during this experience that his new calling and passion was to speak publicly and write about his experiences providing others the opportunity to follow his lead in getting back to good health to once again enjoy life and their loved ones. Follow his story further on his website at: aWarriorRising.com

Warrior Rising has been nominated by our staff as one of their favorite books.