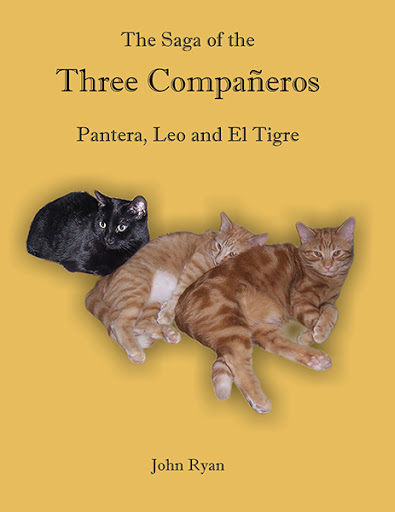 The Saga of the Three Compañeros
Pantera, Leo and El Tigre
by John Ryan

This is a sensitively written enchanting story of three pussycats – a chronicle of the experiences of kittens growing and maturing into fully grown felines. As kittens, just a month old, they almost died a horrific death were it not for their ultra intelligent mamma who alerted the author, John Ryan, to their perilous situation. Once rescued, these little compañeros took over the author’s home and his heart.

This is a tale of the trials and tribulations of kittens learning about the world around them. Every day was a new adventure and from time to time whole new worlds opened up to them and everything was explored with boundless enthusiasm. Actually, this rambunctious trek toward maturity is simply training for their careers as cats!

Throughout all this, and even now as mature felines, they have been inseparable companions, comrades, compañeros, who rely on one another to face life’s challenges. What is remarkable about these cats is the attachment, love and affection they have for one another – from their very beginnings as kittens till the present day.

This is an uplifting story that will appeal to all cat lovers and to those who love to read stories to their children.

The book became the basis for the musical hit Cats.

Now we have The Saga of the Three Compañeros – Pantera, Leo and El Tigre by John Ryan – an illustrated book that explores in straightforward prose the close relationship of a man and his three cats.

It’s a story that tells us as much about Dr. Ryan, a retired University of Winnipeg professor of geography, as it does about his felines.

This large hearted man saved the three abandoned compañeros and their gaunt and desperate mother from almost certain death in an overheated garage on a summer’s day in 2007.

Once rescued, these little compañeros took over the author’s home and his heart. Dr. Ryan took the mother, Tigger, and the father, Harley, to D’Arcy’s ARC (an animal shelter in Winnipeg) where they were both eventually adopted into a good family.

Dr. Ryan chronicles the experiences of the three kittens growing up and maturing into cats with very distinct personalities.

The author’s photographs provide a visual complement to the loving and detailed description of his cats’ lives.

Perhaps, one day, Pantera, Leo and El Tigre may become as well known as Eliot’s Mungojerrie, Rumpelteazer and Old Deuteronomy.

In the meantime, though, this story will appeal to a broad range of readers, regardless of whether you’re a pet owner or not." -Review by Martin Zeilig, a Winnipeg journalist

John Ryan is a retired professor of geography and Senior Scholar at the University of Winnipeg where he taught for 32 years. He has a Ph.D. from McGill and taught a wide range of courses – his research and world interests took him on travels to over 50 countries.

His publications include many journal and Internet articles and chapters in books on geographic, economic and political affairs. His major books include one on the agricultural economy of Manitoba Hutterite colonies and one on the life story and art of his late wife Judith. He is also the co-author of a significant engineering study/report on the feasibility of using underwater cable in Lake Winnipeg for high voltage electricity transmission.

His interest in cats has resulted in two additional books – this one about his own cats and a companion publication, A Tale of Two Kitties—Taj and Bodhi, the cats of Helen Schreider.

John has always been fascinated by the wondrous nature of cats and how these miniature replicas of majestic jungle cats can be such soul-satisfying human companions. He just had to tell the world about Helen’s two cats and his own three lovable furry compañeros who currently share his life.