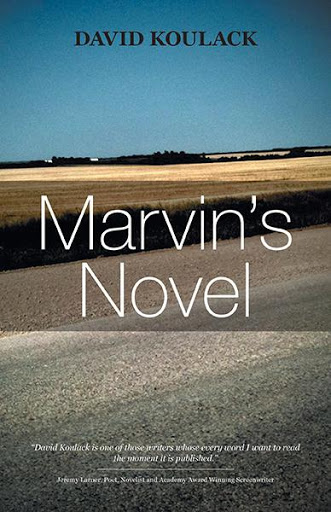 In this funny and heartwarming novel, a man who has been bullied all his life, first by his parents, then by his wife and even by the students he teaches at university, learns to stand up for himself and take control of his own destiny.

“Marvin’s Novel” is the story of Marvin Keselman, a man in search of himself, a man shackled, as are many of us, by his parents’ expectations. They assume that Marvin will remain in New York City and be a doctor like his father and brother before him. But Marvin has other ideas and makes a break for it. He takes a teaching job in a university in Winnipeg, as far away from his parents as he can get, only to find himself periodically returning home to suffer their disapproval in person.

And in Winnipeg the naïve Marvin encounters the ultimate seductress, Myrna Berman. Their wedding, organized by Myrna’s funeral home director father, is a comedic tour de force featuring among other things, a deceitful rabbi, a missing ring, and a dead body. Life after marriage is fraught with new and unpleasant surprises and the situation is made even worse because Marvin’s students are in revolt.

Buffeted on all sides Marvin strives to merely stay afloat but ironically it is only when things go from bad to worse and Marvin is hauled up before the university’s kangaroo court on unfounded charges of racism that he understands that he can be the master of his own fate.

Written with a compassionate appreciation of time, place and human nature, this engaging story will give you the kinds of laughs that you will think about later.

“David Koulack is one of those writers whose every word I want to read the moment it is published.”

David Koulack taught psychology at Brooklyn College and Washington State University before starting the first sleep and dream research laboratory at the University of Manitoba. During his thirty-five years at the University of Manitoba, he published studies in both the areas of social psychology and sleep research, wrote To Catch a Dream: Explorations of Dreaming, co-authored Single Father’s Handbook and co-edited Readings in Social Psychology. He took early retirement in 1999 in order to satisfy his desire to write. His columns have appeared in The Guardian, The Guardian Weekly, The London Sunday Times and The Globe and Mail among others and his fiction and creative nonfiction work has been published in various literary journals such as The Dalhousie Review, Matrix, Canadian Jewish Outlook, Geist, Existere and The Antigonish Review.

Koulack lives and works in Winnipeg.